Please ensure Javascript is enabled for purposes of website accessibility
Log In Help Join The Motley Fool
Free Article Join Over 1 Million Premium Members And Get More In-Depth Stock Guidance and Research
By Jon Quast – Apr 3, 2020 at 10:30AM

Investors fled this retail company because stores are closed and it missed holiday sales expectations.

Shares of Five Below (FIVE 2.50%) fell 27.4% in March, according to data provided by S&P Global Market Intelligence. It's easy to simply blame the COVID-19 pandemic. After all, because of the coronavirus, Five Below has temporarily closed all 900 of its locations. With only meager e-commerce operations, revenue has been decimated.

But shares of Five Below had already sold off earlier in 2020, due to weak holiday sales. Certainly that's causing investors to rethink the company's long-term prospects in this bear market. 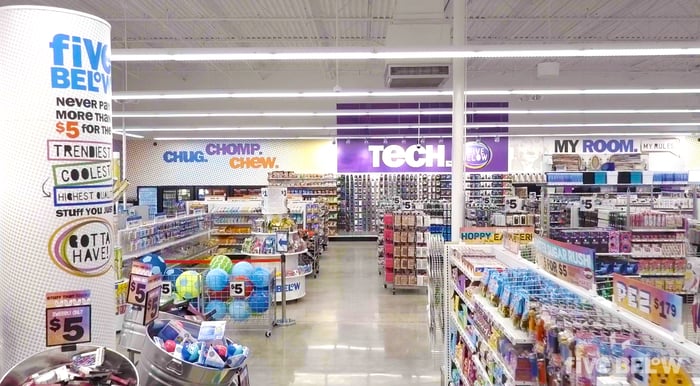 Five Below locations are temporarily closed. Image source: Five Below.

On March 18, Five Below reported fourth-quarter and full-year 2019 results. For 2019, the company reported net sales growth of 18%, net income growth of 17%, and unit growth (new store locations) of 20%. However, Q4 comparable sales fell 2.2%. This decline was disappointing, especially since retail sales were up overall during the holiday season.

Beyond the holiday quarter, the COVID-19 pandemic has devastated Five Below's business. Many discount retailers sell essential items, and have therefore remained open through the coronavirus crisis. Some have even reported sales growth during March. But that's not the case for Five Below. As a retailer of consumer-discretionary products, it had no practical option but to temporarily close up shop and furlough the majority of its employees.

Exact numbers aren't provided, but in the Q4 earnings call, Five Below CEO Joel Anderson said e-commerce was "still a very, very small part of the business." Not having a strong e-commerce business is doubly complicating this situation for the company.

One bad quarter of comparable sales is the least of Five Below's problems right now and needs to be kept in perspective. For the year, comparable sales were up, marking its 14th consecutive year of comp-sale growth. So I don't believe it's correct to question Five Below's long-term prospects. That said, the near-term situation is quite dire. The sooner the economy reopens, the better for Five Below.

For now, Five Below is targeting a reopening on May 1. But that's contingent upon what happens with COVID-19 between now and then. Also, it's unclear what the company is planning regarding unit expansion. Originally it guided for 180 new stores openings in 2020 -- good for 20% unit growth. While it hasn't officially canceled those plans, it's hard to imagine it will hit that lofty goal given the present reality of the coronavirus situation.