Please ensure Javascript is enabled for purposes of website accessibility
Log In Help Join The Motley Fool
Free Article Join Over 1 Million Premium Members And Get More In-Depth Stock Guidance and Research
By Dave Kovaleski - Apr 4, 2020 at 10:30AM

A new survey from the National Financial Educators Council tries to answer the question just in time for Financial Literacy Month.

A recent survey conducted by the National Financial Educators Council (NEFC) shows how concerned Americans are about their personal finances due to the effects of the coronavirus crisis.

According to the survey, which solicited responses from 1,201 people between March 23 and March 27, 58.2% say the crisis has had a negative impact on their personal finances (30.9% called the impact somewhat negative, and 27.3% described it as very negative). About 32% of respondents said the crisis has had neither a positive nor a negative impact, while the remaining 9.9% said the pandemic has had a positive effect on their finances (6.8% indicated the effect was very positive, while 3.1% said somewhat positive).

That's the sentiment right now, but what about the future? 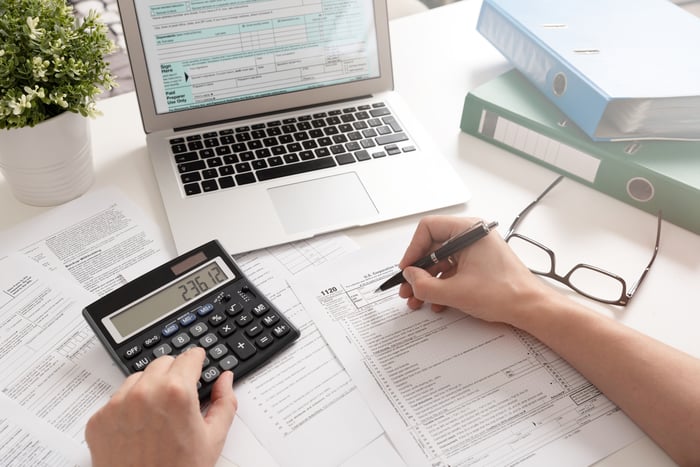 Are you in the majority?

When asked about their concerns about COVID-19 affecting their personal finances over the next three months, the anxiety levels went up. In response to this question, the majority of respondents -- 43% -- said they were very concerned, while 27.8% said somewhat concerned. Combined, 70.8% categorized themselves as concerned about the impact of the disease on their personal finances. Further, 15% said they were neutral -- no concerns one way or the other -- while 6.7% were not very concerned, and 7.5% were not at all worried.

The survey results will be used to encourage people to prepare financially for future disruptions, like pandemics, that could negatively affect their personal finances, NFEC officials said. According to CEO Vince Shorb:

The NFEC has a mission of helping people work toward financial wellness, and we remain firm in that goal. In these scary and difficult times, achieving such financial security becomes critical. We'll emerge from this crisis with an even greater passion and need to help people improve their personal financial situations. The data show that we all are affected by the coronavirus outbreak, but we can get through this crisis by working together.

Being better prepared financially could mean improving your financial literacy or becoming familiar with the various concepts, ideas, and strategies related to personal finance. It could also mean having an emergency fund or an adequate amount of money in savings for unexpected and unforeseen circumstances, like a pandemic. Further, it could mean having manageable debt and expenses, and not living beyond your means. Also, being prepared means having a financial plan for future expenses, like college and retirement, and making sure you have the right risk/reward profile for your goals.