Berkshire just disclosed it had sold Delta and Southwest shares, even at last week's low prices.

Buffett and Co. had to disclose these sales because Berkshire had owned over 10% of each company. Normally, public equity trades don't have to be disclosed until a company files its 13-F statements in the middle of the next quarter. It's unclear if Berkshire has also sold its smaller stakes in United Airlines (UAL -0.82%) or American Airlines (AAL).

Some may have been surprised that Buffett, who is famous for coining the phrase, "Be greedy when others are fearful," would begin selling off stocks that are now trading at low-single-digit P/E ratios and are off by much more than 50% since the year began.

However, these sales don't surprise me at all. In fact, I wouldn't be shocked to learn Berkshire has already sold off its United and American stakes before making the above trades and thus the mandatory disclosures, which is sure to make airline stocks fall further on Monday. Here's why.

Don't ignore these other Buffett-isms

While many know the Buffett-ism, "be greedy when others are fearful," and "our favorite holding period is forever," investors should know that those aren't blanket statements by any means. For the second statement, the real quote is, "when we own portions of outstanding businesses with outstanding managements, our favorite holding period is forever."

While all airlines still have their same managements, it's quite possible Buffett has changed his mind when it comes to airlines being outstanding businesses. If Buffett now believes COVID-19 has changed the intrinsic value of America's airlines, it shows a lot of objectivity and internal fortitude to sell and cut losses. In that sense, these other, lesser-known Buffett-isms would apply to the current situation:

While Buffett usually holds firm to his long-term-oriented, buy-and-hold value investing approach, he has also shown no hesitation to sell when his mind changes about a company's long-term prospects. Buffett completely sold out of IBM (IBM -2.62%) in 2018 after holding the stock for seven years, and has also been selling off longtime holding Wells Fargo (WFC -1.87%) after a series of scandals since 2016 sullied the bank's brand and reputation.

How the intrinsic value of the airlines changed in a month

Investors may be wondering how it's possible that the intrinsic value of airlines changed so much so quickly, especially when most were already trading at relatively cheap valuations to start the year. The answer can be summed up in one word: leverage.

First off, there's financial leverage. As you can see, all four airlines use debt on their balance sheets, which most had used to grow routes and return profits to shareholders in the form of buybacks and dividends. 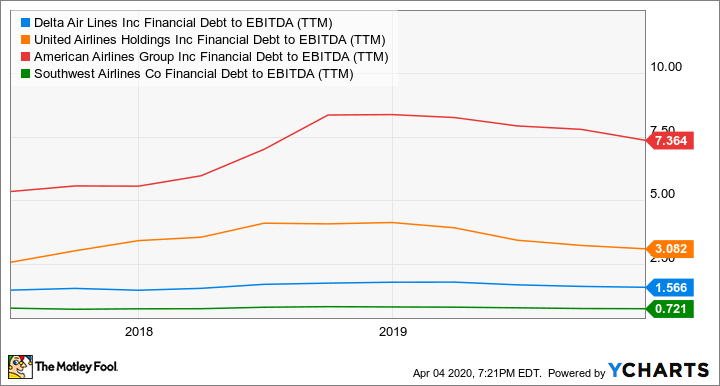 From the above charts, you can see why Berkshire owned more Delta and Southwest -- these were the least-leveraged of the four major airlines.

Second, there's significant leverage in airlines' business models. All airlines have relatively high fixed costs, because of the maintenance of planes, a unionized workforce, and other overhead costs. That's why Buffett had previously thought airlines were terrible investments, before industry consolidation in the last financial crisis made the industry much more attractive in his eyes.

As a result of recent shutdowns, airlines are now burning through a stunning amount of cash per day. United Airlines recently said it was losing $100 million in revenue per day. Delta's CEO Ed Bastian said Delta is burning $60 million in cash per day, and that that number is going to get worse. Even the smaller JetBlue (JBLU -2.17%) is burning $10 million per day. At the end of March, the International Air Transport Association (IATA) published a report predicting the global airline industry will burn $61 billion in cash during the second quarter alone. This incorporates about $39 billion of losses in the second quarter and another $35 billion or so resulting from cancellations and refunds.

But you may retort, "But the government is going to come in and bail the airlines out." That is true, but these bailouts will add a third form of leverage to airlines in the form of government loans or guarantees. As a condition of the bailouts, any company that receives government assistance will have to suspend buybacks and dividends through 2021, and will also be prohibited from buying back stock for as long as the company is "on" government assistance -- likely until the loan is paid off -- and then for an additional year thereafter.

Buffett has long been a fan of stock buybacks, especially for companies with undervalued stock. Therefore, since it appears there won't be capital returns in airline stocks for some time to come, Buffett thought it best to leave this leaking boat for now.

Of course, I could be blowing things out of proportion. It's quite possible that Berkshire has only sold the minimal amount of Delta and Southwest that we know about and still retains stakes in the other two airlines.

However, instead of clinging to hope on airlines, I still think investors should follow Buffett and cut bait. We aren't going to know how much airlines will require in government bailouts, and thus how much debt they will have to pay down in the upcoming years. In addition, we don't know how quickly things will normalize. With a COVID-19 vaccine still likely 18 months to two years away, it's quite possible it could be years before air travel is fully back to normal, even when quarantines are lifted.

In addition, Berkshire has several other fully owned operating businesses that may need internal "bailouts" from headquarters over the next few months. Thus, with internal cash needs abounding and with other stocks with better prospects than airlines also falling with the market, it's not surprising to see Buffett backing off his airline bets in order to put cash to use elsewhere. You should do the same.