Over the weekend, the news was mostly bleak as COVID-19 cases spread around the world, and the U.S. passed 300,000 cases and approached 10,000 fatalities. The next two weeks are expected to be extremely painful as the healthcare system in many parts of the country gets pushed to the limit. 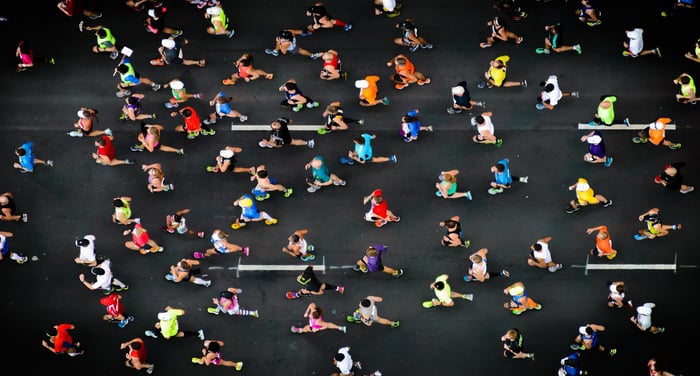 But there's reason for some optimism. There are signs that measures to arrest the spread of the novel coronavirus are working, with a number of hard-hit countries including Spain and Italy seeing a decline in daily deaths after several brutal weeks.

The news that many countries may have come through the worst has investors feeling confident today, sending stock markets around the world higher. The U.S. markets are surging for much the same reason, with Nike, Under Armour, and Foot Locker shares surging upward on the hopes that these three global footwear brands will be able to reopen stores in the near future and benefit from some pent-up demand from the hundreds of millions of people who've been under stay-at-home orders.

There's a good chance that today's surge is on the premature side. As much as it's wonderful to see some of the hardest-hit places like Spain and Italy pass through the top of the curve, the U.S. is heading for what could be one of the deadliest weeks in history. The spread of COVID-19 in the U.S. is about two weeks behind much of Europe, and the trajectory paints a worrying picture that could see tens of thousands more people die before new cases peak and start to fall.

But with that said, the worst of the recession could be still to come. The federal government has taken unprecedented steps to soften the economy's landing, including extending unemployment benefits, sending cash to almost every American home, and implementing a massive lending program to help businesses keep people on the payroll. But that money has yet to actually hit bank accounts.

The point? Today's a nice signal that people are optimistic and hopeful that the worst will be over soon. But a scary dose of reality, in the form of a steady rise in the human toll in the weeks ahead, and more economic data showing the depths of the recession, could send investors back to selling quickly. For instance, Under Armour's plans to lay off workers won't even start for another week, so investors jumping back in today could be acting prematurely.

Nike, Under Armour, and Foot Locker all have plenty of pain ahead of them, likely for much of the second quarter and potentially for most of the rest of 2020. Be prepared for more bad days ahead before the actual recovery, post-COVID-19, begins in earnest. With these three companies' shares still well below their pre-crash highs, today's prices will likely make for a wonderful bargain in a few years -- just be prepared to see them fall even more in the weeks and maybe even months to come.