Please ensure Javascript is enabled for purposes of website accessibility
Log In Help Join The Motley Fool
Free Article Join Over 1 Million Premium Members And Get More In-Depth Stock Guidance and Research
By Bram Berkowitz - Apr 6, 2020 at 10:58AM

Banks will largely be responsible for disbursing the nearly $350 billion in new Small Business Administration funds. Those that can approve loans the quickest could benefit the most.

With much of the economy essentially at a standstill and most businesses trying to survive instead of expanding, banks are probably not going to grow in line with projections they had entering the year. Still, one opportunity that has emerged from the $2 trillion stimulus bill is nearly $350 billion in new lending authority from the U.S. Small Business Administration (SBA), which will be disbursed mostly by banks. To understand just how much money that is, consider that total SBA lending nationwide in the fiscal year 2019 was only about $28 billion.

While a lot of these loans come with a low interest rate, and a good deal of the funding might be forgiven instead of repaid, the Financial Times recently reported that banks stand to make billions of dollars in processing fees from the loans, which are 100% guaranteed by the federal government. Banks, according to the publication, are slated to receive fees of 5% for loans under $350,000, 3% for loans under $2 million, and 1% for loans greater than $2 million. The maximum loan amount that can be issued is $10 million, and all loans will not incur a capital charge. 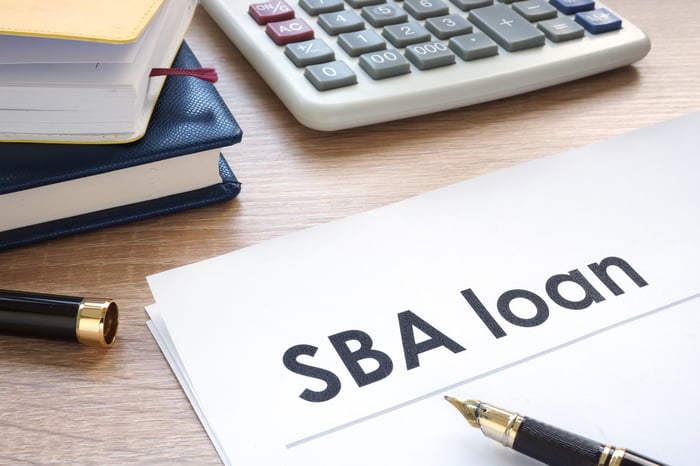 Why will they succeed?

The main reason these particular banks will have some advantage of the current situation has nothing to do with their past performance. Rather, it has to do with the fact that they are all working with a fintech software company called Numerated, which uses artificial intelligence and machine learning to approve small business loans quickly and efficiently. Other publicly traded banks could use Numerated, but these three banks have already integrated its technology into their system and are already familiar with the product.

Numerated, which has raised $32 million in venture funding, launched a few years ago with a simple promise: It could analyze an application and approve small business loans of up to $150,000 in five minutes. Numerated eventually increased that amount to $250,000. As the product has advanced to approve larger loans, I am not sure the approval time is still five minutes, but it's quick. This is important because SBA loans often involve a lot of documentation related to the fact the government is backing the loans.

For a while now, Numerated has offered a product that can approve SBA 7(a) express loans up to $350,000 with same-day funding. Right after the stimulus bill passed, Numerated CEO Dan O'Malley announced the company had released a new product specifically targeted at approving loans related to the stimulus's SBA paycheck protection program.

A spokesperson for Numerated told me the new product will feature same-day funding as well, although it is not yet clear if the banks that use this product will move ahead with approvals this quickly. However, with more than 10 million U.S. workers now unemployed and many businesses already at a breaking point in terms of operating capital, U.S. SBA Administrator Jovita Corranza recently emphasized the priority is speed. She also said the SBA is relying on lenders to use their own systems and processes to make these loans.

Who's the best positioned?

I like the Connecticut-based People's United Bank best in this case. In 2019, the bank was the second biggest SBA lender in Connecticut . It also has a regional presence, a big plus considering there are 400,000 small businesses in the Northeast. With roughly $58 billion in assets, it is the largest of these three banks, which I would expect to be a bonus considering there is so much lending to do in such a short period of time.

Next, I like BNB Bank. It's only about $5 billion in assets, but it has packed a mean punch on the SBA lending side. Through the third quarter of fiscal 2019, the bank had done the sixth most SBA lending in New York, coming in behind other SBA powerhouses such as Live Oak Bank and JPMorgan Chase. And of course there is nothing wrong with the $7 billion asset Seacoast Bank, which ranked No. 10 in SBA loan volume in South Florida in 2019 .

Only one aspect, but important

There is more to a bank's success than just its ability to execute SBA Lending. Obviously, you still need to evaluate banks based on profitability metrics and asset quality, among other measures. But considering that loan growth could be hard to come by as businesses hunker down, these three lenders have some nice tailwinds from the new SBA funding, which is an absolutely enormous amount of funds compared to SBA loan volume last year. Making speedy loans is going to be a huge factor in determining a lender's success, making the partnership with Numerated a huge advantage.