The stock market rally faded a bit, but these stocks stayed strong.

The stock market opened sharply higher on Tuesday, but the market cooled off quite a bit as the day went on. At 3:15 p.m. EDT, the Dow Jones Industrial Average and S&P 500 benchmark index were both higher by a bit more than 1%.

To be clear, the financial sector has been one of the hardest hit parts of the market in the coronavirus-related downturn, and all of these stocks are still a long way from their highs. Capital One's share price is less than half of what it was in late January, while Discover is still down by about 60% since that time. Amex is the best performer of the three, down just 36% from its January high. 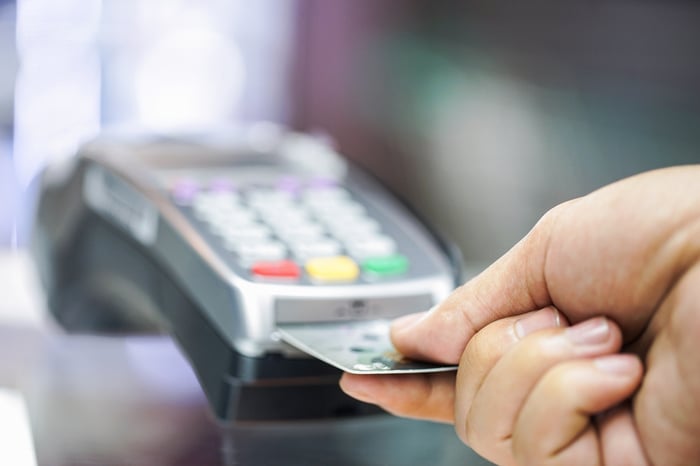 There are a couple reasons for the disproportionately strong performance of these stocks. All three have substantial portfolios of credit card loans, which can perform poorly during recessions. If the COVID-19 pandemic drags on through the summer or even into the fall, more and more Americans could find themselves unable to pay their bills. And credit card debt tends to be a lower priority for consumers to pay in tough times when compared with mortgages and auto loans.

We're finally starting to see some good news related to the battle against the coronavirus outbreak. New infection numbers seem to be peaking in some key U.S. hotspots, and in Italy and several other hard-hit European countries, there's increasing evidence that the outbreak is turning a corner.

What's more, the U.S. Treasury announced today it would seek to expand the $350 billion small business lending program that was announced as part of the CARES Act. The Senate also announced its intention to expand the program, planning to vote on an additional $250 billion on Thursday. Treasury Secretary Steven Mnuchin indicated that he had reached out to both parties in both the House of Representatives and the Senate, and sounded optimistic that such an increase would get done.

Many small businesses are customers of these credit card companies, so this could make it easier for them to survive the pandemic and remain in relatively good financial shape. Amex and Capital One have especially large small-business credit operations.

To be clear, we're a long way from this pandemic being over. Even under the most optimistic scenarios, the near-shutdown of the U.S. economy will last for at least another month or so, and longer is more likely. However, the recent news is the first sign of light at the end of the tunnel, and investors are happy to see it. Plus, the prospect of the expansion of the small-business lending program from $350 billion to $600 billion is good news for the credit card lenders with large small-business lending operations.