GE's aerospace business is the key driver of its earnings -- and conditions in that industry are ugly. But there are a lot of other reasons to worry about GE's health right now.

Even before the COVID-19 pandemic slammed the brakes on global commerce, General Electric (GE 1.90%) was hurting. And it's one of the many industrial companies that are likely to take heavy damage as the coronavirus -- and the efforts to stem its spread -- ripple across the world economy.

The stock is down about 35% so far in 2020, and it may well be a good long-term value right now, but investors need to be aware of the near- and medium-term risks, because they are coming from a number of different angles right now. While GE's aviation segment is likely to take the heaviest blow, investors should brace themselves for declines across its other businesses as well. 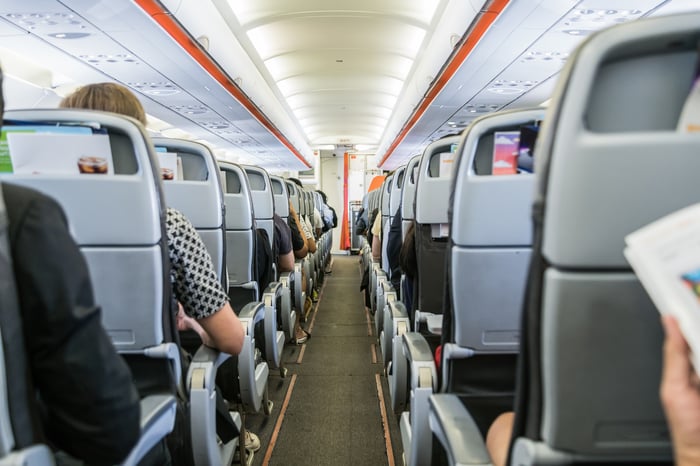 It's more than just aviation

Let's start with a look at the key risk factors. They include:

The chart below illustrates how bad the stock market's sentiment is around the parts of GE's businesses right now. For example, AerCap (AER 1.33%) is the biggest competitor to GECAS, and clearly, the market is fearful about conditions in the aviation leasing market. That pessimism was compounded by a recent order cancellation of Boeing planes by the third-biggest leasing company, Avolon.

France's Safran is GE Aviation's joint-venture partner at CFM International, which manufactures the LEAP engine for the Boeing 737 MAX and the Airbus A320 NEO family. Meanwhile, GE's stake in Baker Hughes is now worth less than $4 billion -- compare that with the $12 billion that GE's management assumed, in January, that it would have as a resource in order to reduce debt. As for GE Power, it's worth noting that the one reason the segment's cash flow generation was better than expected in 2019 was an increase in power outages. In a weak power-demand environment, the frequency of outages could drop. 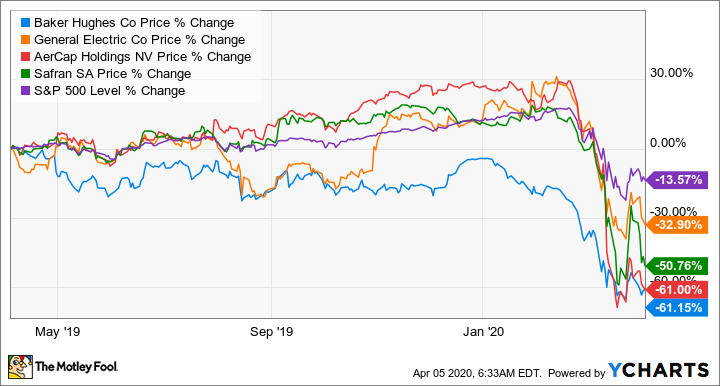 When it comes to the outlook for GE Aviation, there are two diametrically opposed ways to view matters, and they are probably both wrong. Those who take a glass-half-full view expect the aviation market will bounce back just as it did after the SARS outbreak in 2002-2003. Based on that scenario, all investors need to do is make a slight downward revision to their estimates of the long-term earnings and cash flow from GE Aviation to reflect a couple of weak quarters.

Those taking a glass-half-empty view expect that the recovery in aviation will be very slow, and will feature airline bankruptcies and an overall step-down in growth expectations for the industry. In this scenario, investors will have to significantly downgrade earnings and cash flow expectations, principally from GE Aviation engine spares and aftermarket sales.

Frankly, it's impossible to predict which of these views will prove more accurate, not least because the outcome will be contingent on how well the world's COVID-19 containment measures work.

However, it's worth noting that there's substantial risk in the latter scenario. Boeing CEO Dave Calhoun is already preparing his workers for a "new reality" in the industry. If this implies a step-down in order expectations for narrow-body aircraft, then the LEAP engine simply won't generate as much cash flow over the long term as previously expected.

Similarly, Boeing's previous CEO Dennis Muilenburg was expecting a wide-body aircraft replacement cycle would kick in this year, driven by demand for Boeing's 777X. That's surely not going to happen now, which is bad news for GE as its GE9X engine is the sole option on the plane.

To cap it all, if the long-term growth rate of air passenger traffic declines, then the highly profitable services revenue generated by GE's installed base of engines is under threat too.

Cautious investors will surely prefer to adopt a "wait and see" approach to matters. While history suggests the commercial aviation market will eventually return to growth, there's a lot of near-term risk around GE right now, and not just from its aviation business. In addition, it's far from clear how long governments' COVID-19 containment measures will need to stay in place. The longer they do, the more financial stress the airlines will come under. That's not good news for GE.