If you can look past the 737 MAX debacle, Boeing (NYSE:BA) has midterm prospects that appear to be very good. Unfortunately, the grounding of the aircraft has overshadowed a year of otherwise good progress at the company, which continues to lay the groundwork for future improvement. Let's analyze where it could be in five years, with a focus on its commercial operations.

Predicting the state of the global economy in a year's time is hard enough, let alone across a half-decade -- an important point since the prospects for the Boeing commercial airplanes (BCA) division are always largely reliant on the state of the global aviation markets. If passenger and freight-traffic growth is good, planes get flown more, routes are more profitable, and airlines buy more planes. 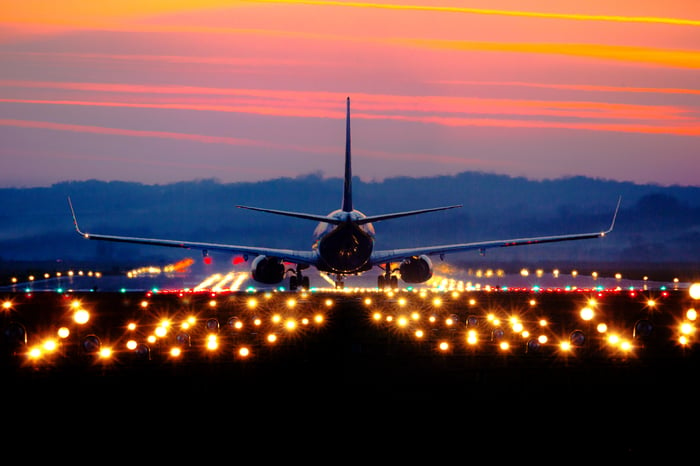 The good news for Boeing is that there appears to have been a step change in the profitability of airlines in the last decade. If such conditions continue, then Boeing and the commercial aviation industry look set for an extended period of growth (as long as global growth holds up). 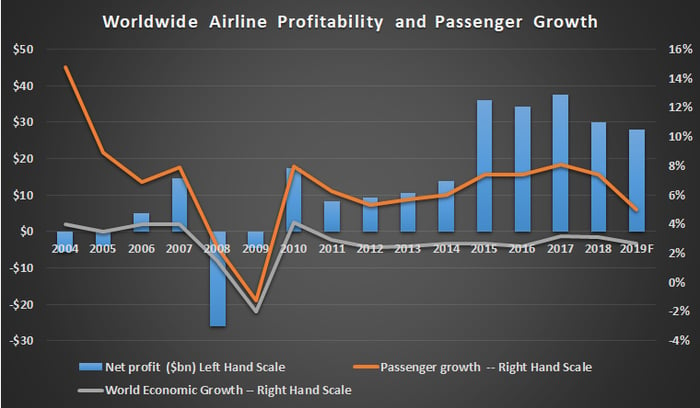 In order to profit from ongoing economic growth and airline profitability, it will have to get the 737 MAX back in service. This looks like a matter of when rather than if, but it's clear that Boeing is going to take a multibillion-dollar hit to earnings in the meantime.

Moreover, when the 737 MAX gets back in service, the company will have to ramp up overall 737 production again, initially from the reduced rate of 42 a month, and then at least to the 57 a month that were initially planned for 2019. This won't come without challenges.

That said, the company's track record of production ramp-ups has been good, and in five years, Boeing is likely to be delivering significant numbers of 737 MAXs again.

A rise in wide-body demand and a new aircraft?

CEO Dennis Muilenburg believes that a replacement cycle for wide-body aircraft will start in a year or so, and the new 777X is well positioned to benefit. Meanwhile, unit production costs are falling on the 787, and margins are going up as Boeing has successfully ramped up production to 14 a month from 12. If Muilenburg is right about the wide-body cycle, then Boeing is set for a second wind of aircraft demand.

And a final decision still hasn't been made on the so-called 797 New Midsize Aeroplane (NMA) intended to replace the aging 757 and 767.

Putting all this together, a positive scenario sees ongoing strength in demand, a significant lift in 737 MAX production, wide-body order growth for the 777X and 787, and a new 797 about to enter service.

It's no secret that Boeing has ongoing plans to cut supply chain costs, expand its own manufacturing footprint, and muscle in on its suppliers' margin. Its maneuvering to this effect is seen as a key reason behind the consolidation taking place among suppliers -- most notably with United Technologies -- as the aviation supply companies prepare for a more competitive marketplace.

In addition, Muilenburg has a target for $50 billion in sales for the Boeing global services (BGS) segment over time. BGS is forecast to increase sales by 8% to 11% in 2019 to a range of $18.5 billion to $19 billion, so it's likely that the segment will be a lot closer to Muilenburg's target in five years.

An increase in BGS revenue could mean two key things to Boeing investors. First, based on initial guidance for 2019, BGS is set to have an operating margin above 15% -- higher than the original forecast for BCA of 14.5% to 15% and significantly more than the forecast for Boeing defense, space, and security (BDS). In other words, an expansion in BGS revenue could lead to overall margin expansion at Boeing.

Second, as services tend to be less cyclical than airplane sales, growth at BGS would reduce the cyclicality of Boeing's earnings.

Airlines are in good financial shape, and an increase in wide-body demand will play to the company's strengths.

It has a margin expansion opportunity thanks to production ramp-ups and manufacturing cost cuts on the 737 MAX and 787 in the future, while the 777X will be in production -- and possibly the 797, too. Meanwhile, expanding BGS sales, more vertical integration, and further cuts to supply chain costs also offer an opportunity to expand sales and margin while reducing cyclicality.

In short, despite the doom and gloom around the 737 MAX right now, Boeing is likely to be in much better shape in a few years.