Please ensure Javascript is enabled for purposes of website accessibility
Log In Help Join The Motley Fool
Free Article Join Over 1 Million Premium Members And Get More In-Depth Stock Guidance and Research
By Rhian Hunt – Apr 8, 2020 at 10:14AM

A similar chemical fog is used to purge airliners of dangerous germs.

With a tsunami of orders rolling in as Americans avoid crowded retail spaces, Amazon.com (AMZN -1.57%) has stepped up its efforts to keep its warehouses clear of the COVID-19 coronavirus yet again, this time by experimenting with disinfectant fog. The bustling facilities are handling an approximately 50-fold jump in grocery orders and higher purchase numbers in other categories thanks to quarantines, social distancing, and sold-out staples at brick-and-mortar supermarkets, according to The New York Times, making more stringent measures a necessity.

Despite efforts to keep the dangerous viral respiratory infection at bay, approximately 13 Amazon warehouses already had coronavirus cases two weeks ago, according to Reuters. Though the online retail titan is reluctant to share data on new infections, the Times reports a minimum of 50 warehouses may have cases of COVID-19 among their workforce. This follows a 100,000-strong hiring surge to meet skyrocketing orders. 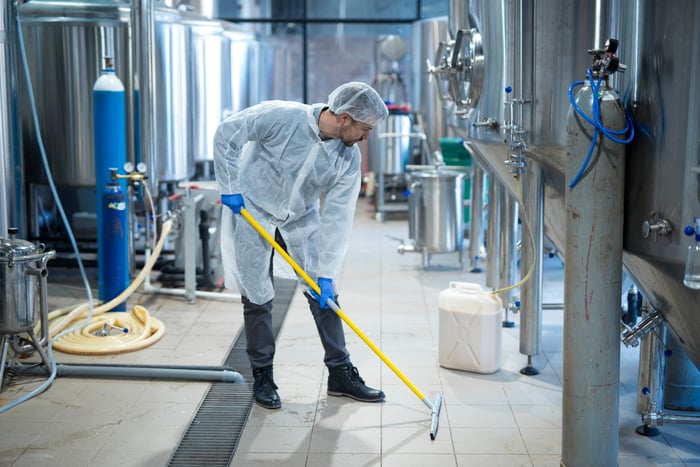 Though the company has deployed masks and temperature checks at its locations,  the disinfectant fog is a possible next step in the fight against infection. Hospitals and airports already use similar methods to wipe out infectious microorganisms on a large scale. Amazon hasn't disclosed the specific disinfectant it's using, but fogs like Calla 1452 are capable of killing tough viruses like HIV and SARS and have already been used by airlines in an effort to fight the novel coronavirus.

Amazon is using the disinfectant fog on a trial basis at one warehouse on Staten Island, designated JFK8. This is the same warehouse where quarantined employee Chris Smalls organized a strike over allegedly inadequate protection measures, after which he was fired. Approximately 4,000 people work at the facility. Amazon has not stated how long the test will continue.