But no manufacturer was spared from the carnage as the coronavirus pandemic has spread.

While shelter-at-home orders typically allow for going outdoors to exercise, people apparently aren't using the opportunity to stock up on new athletic gear.

Market researchers at NPD Group say the decline in retail sales of athletic footwear accelerated in the final week of March, plunging 76% from the week before, during which it suffered a 65% drop. 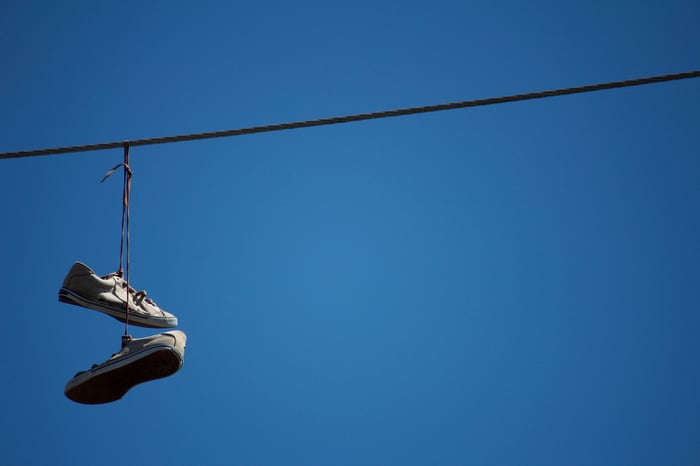 Across the board decline

With retail stores closed to help control the spread of COVID-19, the disease caused by the coronavirus, the decline in sales is not unexpected. Although retailers have been able to offset some of the worst aspects of the sales hit through their e-commerce channels, NPD says it is not large enough to make much of a difference.

Under Armour (UA 1.76%) (UAA 0.69%) and Japanese footwear maker Asics have suffered the most through the downturn, with sales down 85% for the period, but NPD's senior industry advisor for sports Matt Powell said "there are no bright spots."

The worst segments of the category have been basketball and skating shoes, which plunged nearly 80% while sports lifestyle shoes and running shoes fell by mid-70% rates. And with major league sports seasons suspended due to the pandemic, sales of footwear for spring sports such as baseball and soccer have all but evaporated: Sales are down nearly 100%.

Under Armour will begin furloughing employees next week, though it will continue benefits through mid-June. It also revealed a restructuring plan that will see it take as much as $525 million in one-time charges.