Please ensure Javascript is enabled for purposes of website accessibility
Log In Help Join The Motley Fool
Free Article Join Over 1 Million Premium Members And Get More In-Depth Stock Guidance and Research
By Jeremy Bowman - Apr 9, 2020 at 6:10AM

The coronavirus pandemic has turned normal shopping patterns in the U.S. on their head. With much of the country focused on stocking up on goods in preparation for weeks under "stay-at-home" orders, there have been shortages of products like toilet paper and cleaning supplies. Meanwhile, apparel retailers like Gap have been forced to close stores across the country and are canceling orders through the summer as clothes shopping is unlikely to return to previous levels until Americans start to go back to work and resume their normal lives.

On the other hand, eggs are among the products that have seen a spike in demand. Demand for most food staples tends to rise during disaster and hard times, and eggs are one of the most versatile foods around. High in protein, affordable, and filling, they're a necessity for baking -- and, of course, a favorite for breakfast.

According to the USDA, national prices for eggs have more than quadrupled from $0.589 per dozen on February 28 to $2.38 per dozen on April 3 due to a spike in demand from those stock-up trips (as well as reduced supply). Across the country, supermarkets have reported egg shortages, while some have put a limit on the number of eggs customers can buy.

No company will benefit more from this trend than Cal-Maine Foods (CALM -2.21%), the nation's biggest egg supplier and one whose fortunes are closely tied to the price of eggs. 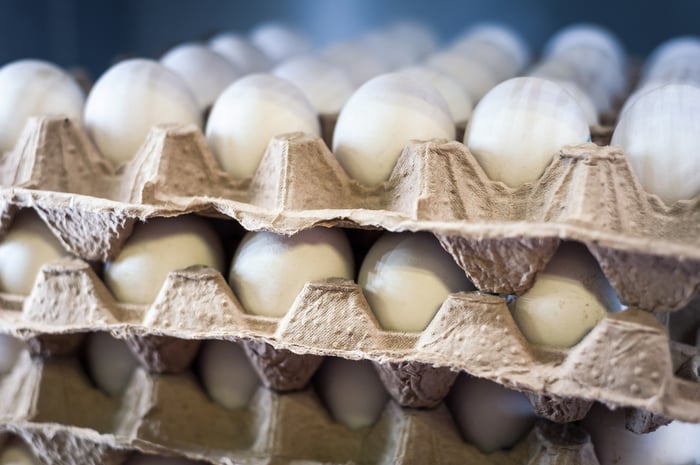 Cal-Maine shares last spiked during the avian flu epidemic in 2015, which wiped out 10% of the nation's egg-laying hen population, but prices have risen even faster this time around. 2019 had been a rough year for egg producers like Cal-Maine, and in fact a number of them cut supply in order to boost prices prior to the coronavirus outbreak, which should help keep prices elevated over the coming months. It takes four to five months to raise an egg-laying hen, and according to a report in The Wall Street Journal, few farmers have the appetite right now to add extra facilities or expand their flock as no one knows how long the outbreak will last or what its effects on American eating habits will be. With supply therefore capped at its current levels, that should support bumper egg prices for the coming months.

In its recent earnings report, Cal-Maine didn't directly address the spike in egg prices, but noted the current high demand for eggs and said that its supply chain and delivery had not been affected by the COVID-19 outbreak. With fuel and feed prices down, Cal-Maine also seems set to benefit on the cost side as well, as feed costs make up more than half of its egg production costs.

Finally, as a producer of eggs, a consumer staple product, Cal-Maine is well prepared for a recession, as demand for eggs is unlikely to slow even in a poor economy. Though some consumers may trade down from specialty to non-specialty eggs, overall demand for eggs is likely to remain strong given their utility and affordability. In 2008, during the last recession, egg prices soared as well.

A recession could also present the company with an opportunity for a buyout. It has a long history of acquisitions, having made 21 of them since 1989. Last October it took over the egg production assets from Mahard Egg Farm for $45.5 million, giving it 3.9 million egg-laying hens and facilities in Texas and Oklahoma. Cal-Maine has no debt and an immaculate balance sheet with an asset-to-liabilities ratio of 7. If other egg producers get into trouble, Cal-Maine will likely take advantage and buy out its competitors.

Is an egg bust coming?

Wall Street has thus far seemed skeptical that higher egg prices will last. Cal-Maine stock has essentially traded flat since the coronavirus sell-off started, although admittedly, that's still been enough to outperform the S&P 500 by a wide margin.

However, that skepticism seems like a mistake. There's skyrocketing demand and limited supply for the product it sells, and eggs are a recession-proof product. The company is an industry leader that is well positioned to make acquisitions, and its operations have thus far been unaffected by the outbreak. Historically, Cal-Maine has been an outperformer -- the stock has jumped more than 4,000% since 2000 -- though its recent performance has been underwhelming. Investors can also reap an immediate reward from owning Cal-Maine shares: The company pays one third of its quarterly profits as dividends, meaning the payout fluctuates each quarter according to performance. If profits soar, investors could see yields temporarily rise to the 10% range based on the current stock price.

Uncertainty in the stock market and the economy remains extremely high, and no one knows how long the outbreak will last or what the economy will look like when it reopens. One thing is certain, though: American demand for eggs isn't going anywhere. With limited supply and an environment favoring elevated demand, Cal-Maine looks set to be a reliable winner in this volatile economic climate.