Please ensure Javascript is enabled for purposes of website accessibility
Log In Help Join The Motley Fool
Free Article Join Over 1 Million Premium Members And Get More In-Depth Stock Guidance and Research
By Brian Withers – Apr 9, 2020 at 9:58AM

When a CEO says “I really messed up,” it leaves investors wondering what’s next.

As millions of new users flocked to Zoom Video Communications' (ZM 1.27%) software for school classes, AA meetings, and even virtual happy hours, the company's video chat platform's security, scalability, and privacy flaws were exposed in a big way. Hackers broke into meetings, customer service became impossible to reach, and a lawsuit was even filed. Not surprisingly, some customers are leaving for other solutions and may not return.

Shareholders have been on a wild ride through this whirlwind, with the com[pany's stock starting the year trading at $68 a share, rising to over $160 in March, and dropping back to under $120 this week. Let's take a look at what happened, what the company is doing about it, and where it will be a year from now. 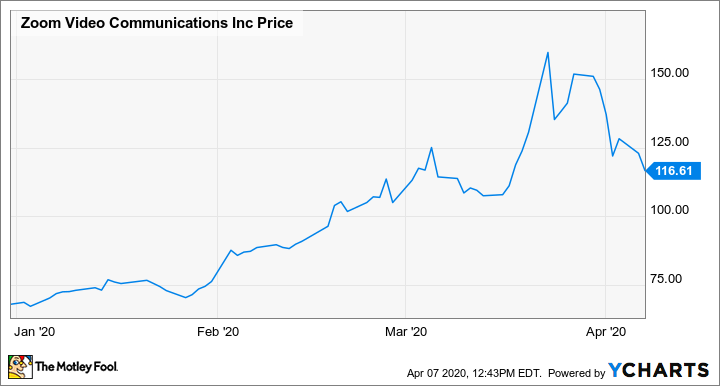 Zoom Video had all the best intentions

Zoom's video meeting software has always made it easy for users to get started with video chatting. In a matter of minutes, a new user can set up an account and schedule a meeting with friends or colleagues. CEO and founder Eric Yaun didn't want his sales and marketing team to take economic advantage of the coronavirus outbreak. Instead, the CEO wanted to help K-12 educators who found themselves without a physical space to hold class.

On March 6, Zoom announced it was "working to provide teachers, administrators, and students around the world with the resources they need to quickly spin up virtual classrooms." Over 90,000 schools around the globe took the company up on its offer. At the same time, millions of employers and individuals started using the platform for the first time. Daily demand skyrocketed 20-fold over the course of a couple of months, and a platform that was intended to be used behind a corporate firewall was now exposed to the wild and often unpredictable global internet. 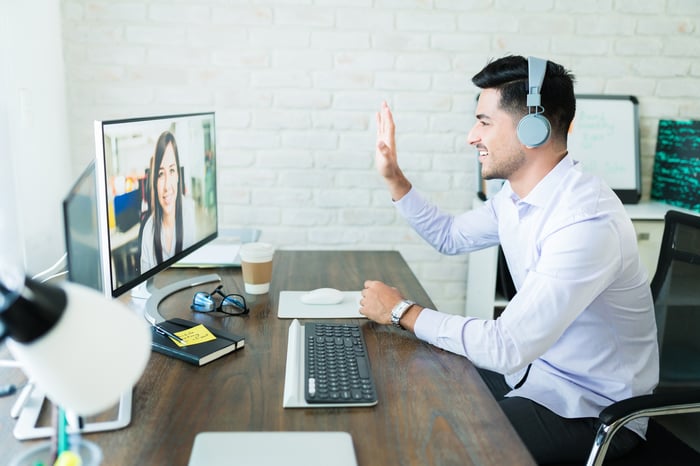 Zoom's popularity has soared in the past few months, but that's caused problems for the company. Image source: Getty Images.

The issues were numerous. The most widely publicized problem involved "Zoombombing" events, where hackers joined meetings and shared pornographic videos or hate speech. This happened often enough that the FBI published security guidelines for users. Zoom's customer service was stretched to the max with paying users waiting in virtual lines behind hundreds of others to link up with chat support. Additionally, its data-sharing practices have come into question and have attracted unwanted attention from Congress and several state attorneys general offices, and lawsuits from California and New York.

The company's best intentions have created numerous unintended consequences, and now it's dealing with the fallout.

Moving quickly to win back trust

The CEO published a message to users on April 1 detailing the problems and the actions Zoom's taking. It has placed a 90-day freeze on all new features, diverted the entire engineering team to "focus on our biggest trust, safety, and privacy issues," and hired third-party experts to ensure the software adequately handles all its new consumer use cases.

In an interview with CNN after the memo was published, Yaun admitted the company "moved too fast" and made "missteps." These actions have caused marquee customers such as Space X, NASA, and the New York City Department of Education to leave for other solutions.

Zoombombing and many of the other security issues stem from the easy-to-use design that made the software popular in the first place. The software has always provided built-in options to make calls more secure, such as password protection, screen sharing only after host approval, and a virtual waiting room where the call host can choose participants. But turning on these features wasn't easy, so many users just used default settings that were less secure. This is changing.

As for security and privacy flaws, a software patch was released the day after Yuan's message to users, and more fixes are planned over the next 90 days.

In addition to software upgrades, Zoom needs to ramp up its customer service to match demand, deal with lawsuits and government inquiries, and win back customer trust. The company is taking the first steps toward mending these issues -- accepting responsibility, prioritizing the fixes over everything else, and promising not to rest until the problems are behind it. These problems will take longer than issuing a software fix, but Yuan has said: "that the safety, privacy, and security of our platform is worthy of the trust you [its customers] all have put in us."

Thomas J. Watson, an early CEO of IBM, would say these events provide a hard-earned lesson.

"Failure is a teacher; a harsh one, but the best." -- Thomas J. Watson

Yaun and his team of Zoomers will have to put in long hours to make things right for customers, but from these failures, it will create a better platform and emerge a stronger company.

Shareholders should expect continued volatility in the year ahead as this software-as-a-service operator works through these issues and people get back to a new normal of a post-coronavirus world. With its focus, its commitment, and the speed that it's moving at, this is still a buy-and-never-sell stock.

Looking ahead to April 2021, Zoom will most certainly have many more paying customers (consumers, educators, and corporations) than it does today, and that should make shareholders happy.