One thing's for sure: It won't make millionaires overnight.

I believe the stock market is one of the greatest millionaire-maker tools ever. While the term "millionaire maker" is subject to one's initial cost, I take the term to mean a stock that can increase 10 times in value over the life of the investment. These 10-baggers are out there, but hard to find. 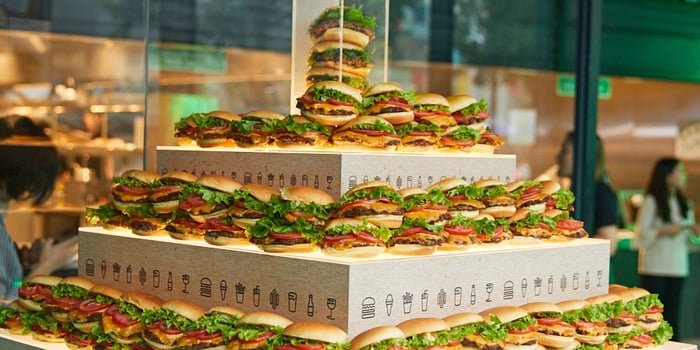 Can it generate 10-bagger revenue?

Let's establish what a 10-bagger for Shake Shack looks like. Right now, the company has a market capitalization of $1.5 billion -- small-cap territory. If it became a 10-bagger, it would be worth around $15 billion. That's not impossible for a fast-casual restaurant stock. For comparison, the restaurant gold standard is Chipotle Mexican Grill (CMG 2.62%) with around a $20 billion market cap.

This is partly how Chipotle grew into a $20 billion market cap. It quickly grew its restaurant base to 2,622 locations, all of which are company-owned. That's notably more locations than Shake Shack is targeting. When it went public in 2015, it was aiming for 450 domestic company-owned locations. It currently has 163, so its long-term goal is still a long way off.

Granted, comparing Shake Shack to Chipotle with unit count is misleading, because Shake Shack has far superior average unit volume (AUV), the sales volume per restaurant location. For 2019, Chipotle's AUV was $2.2 million compared with AUV of $4.1 million at Shake Shack. In theory, Shake Shack could be a big business with relatively few locations.

But to reach a $15 billion market cap, Shake Shack would likely need to generate between $5 billion and $7.5 billion in annual revenue -- a price-to-sales ratio in a range of 2 to 3. I don't believe even 450 company-owned locations could do that. Keep in mind this chain started in New York City, where it's AUV is very high. It doesn't break out New York City numbers anymore, but when it went public, these New York locations had $7.4 million AUV.

As Shake Shack has expanded outside its home market, AUV has consistently fallen. For 2020, management was projecting AUV to fall to a range of $3.7 million to $3.8 million. And it projects long-term AUV of just $3 million. So at maturity, total revenue could far exceed $1 billion, but still fall short of the revenue necessary to make this a 10-bagger.

One card Shake Shack has up its sleeve is a healthy profit margin. Starting with restaurant-level profit, its margin was 22.3% in 2019, beating Chipotle's 20.5% margin. This measure only looks at restaurant operations, excluding corporate expenses and capital expenditures like building new restaurant locations.

However, when you look at the bottom line, Chipotle is superior. Its net profit margin was 6.3% in 2019, while Shake Shack's was just 4.1%. That's because, as a larger chain, Chipotle has gained leverage. If Shake Shack can be disciplined with nonrestaurant expenses, this can be a much more profitable business as it reaches maturity, since it's already very profitable at the restaurant level.

Returning to 10-bagger thoughts, whether Shake Shack will ever mint new millionaires will depend on what it does with that future cash flow. It could invest in more growth via developing a new restaurant concept or buying out another chain. That's very speculative; it's never expressed interest in doing so. It could also make shareholder-friendly moves like paying a dividend or buying back shares. Any of these moves could propel the stock higher.

But is it a millionaire maker?

To be clear, I'm describing a very optimistic multidecade scenario. Shake Shack is a top hospitality brand worthy of some optimism, and it could outperform the market long term. But reaching millionaire-maker status will be hard.

That said, one's entry point into the stock matters. And I believe there's a good chance Shake Shack stock could head lower in coming months, even though it's already down over 60% from 52-week highs. Its restaurants are in high population areas with some of the strictest COVID-19 measures, including its home market of New York, sending sales down 70%. While it has enough liquidity to survive for now, it may struggle in coming quarters to recapture its former business.