Please ensure Javascript is enabled for purposes of website accessibility
Log In Help Join The Motley Fool
Free Article Join Over 1 Million Premium Members And Get More In-Depth Stock Guidance and Research
By Adam Levine-Weinberg – Apr 11, 2020 at 9:20AM

A plunge in air travel demand has decimated GE Aviation's 2020 outlook, and smaller headwinds in some of GE's other businesses will also weigh on profitability and cash flow this year. But GE has what it takes to bounce back.

At its investor day a little more than a month ago, General Electric (GE -1.24%) reaffirmed its guidance for another year of modest margin expansion and a return to free cash flow growth in 2020. However, while this outlook incorporated an estimated $200 million to $300 million hit to operating profit and a $300 million to $500 million reduction in free cash flow due to the spread of COVID-19, the guidance did not assume any impact from the coronavirus beyond the first quarter.

Unfortunately, COVID-19 has ballooned from a regional health crisis into a massive global pandemic over the past five weeks. Not surprisingly, this forced GE to withdraw its 2020 guidance on Thursday.

The good news is that GE has dramatically improved its balance sheet over the past two years, mainly through a series of asset sales. Profitability and cash flow are likely to rebound strongly over the next two or three years as the global economy recovers. With GE stock having fallen more than 45% from its February high, this could be a good buying opportunity for patient, long-term investors. 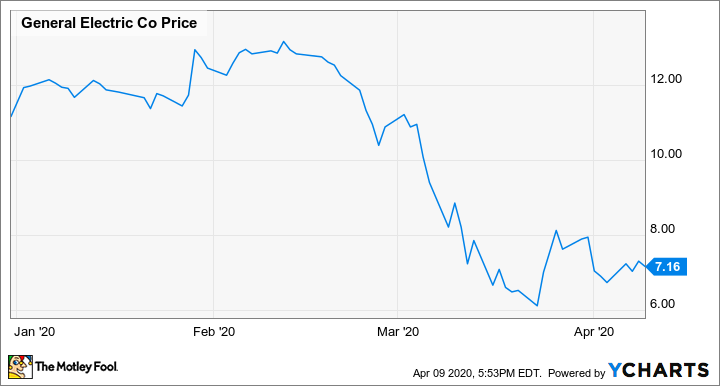 In recent weeks, it has become obvious that the impact of COVID-19 on GE's business will be even greater during the next few quarters than it was last quarter. After all, the global aviation industry has been crushed by COVID-19, and GE Aviation is the company's most important business segment. It accounted for 38% of industrial segment revenue, 65% of industrial segment profit, and more than 100% of industrial free cash flow in 2019.

In an update on March 23, General Electric acknowledged the pressure on its aviation business. At the time, it said it would lay off 10% of GE Aviation's U.S. workforce and temporarily furlough 50% of its U.S. maintenance, repair, and overhaul (MRO) employees. It also warned that similar actions were likely in other countries. A little over a week ago, GE went further and furloughed half of its jet-engine manufacturing workers in the U.S. for four weeks.

With many airlines parking the majority of their aircraft and deferring or canceling as many orders as possible, GE is bracing for a sharp drop in sales of new engines and maintenance revenue for existing engines. The rapid change in GE Aviation's near-term outlook clearly made GE's initial guidance for 2020 outdated. COVID-19 will hurt demand in some of GE's other business segments, too. 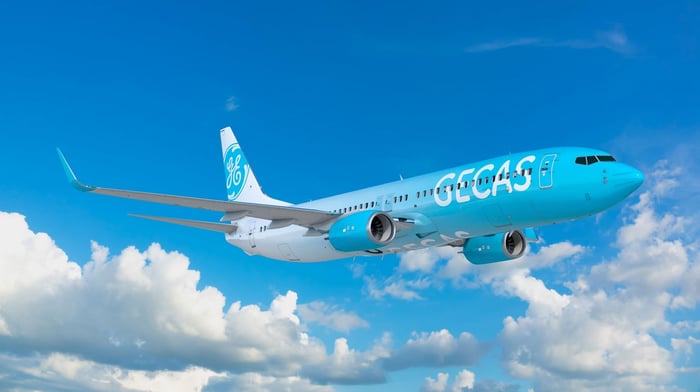 GE isn't providing new 2020 guidance, as it "cannot forecast with reasonable accuracy the full duration, magnitude, and pace of recovery across our end markets, operations, and supply chains." However, it did say that Q1 adjusted earnings per share will come up well short of the company's prior forecast of $0.10.

Had the COVID-19 pandemic struck a year or two ago, GE would have been in big trouble. At that time, it had a very weak balance sheet and was early in the process of fixing its troubled power and renewable energy segments. However, it's in a much stronger position now.

GE raised more than $15 billion from selling industrial assets in 2018 and 2019 while also scaling back its GE Capital finance subsidiary. As a result, on a consolidated basis, borrowings declined from $134.6 billion at the end of 2017 to $90.9 billion at the end of 2019, while cash and investments rose slightly from $82.7 billion to $84.9 billion. The recent sale of GE's biopharma subsidiary, which closed on March 31, brought in another $20 billion of cash.

That windfall gives GE plenty of cash to repay its short-term borrowings of $22.1 billion, add to its insurance and pension reserves, and cover its likely 2020 cash burn. GE also had approximately $35 billion of borrowing capacity on its credit facilities entering the year.

In short, while 2020 is likely to be a terrible year for General Electric, the temporary headwinds it faces don't represent an existential threat to the company.

GE can bounce back

Airlines have implemented unprecedented capacity cuts as demand has evaporated due to coronavirus. In the U.S., many airlines are cutting capacity by 70% or more this month. Furthermore, most airline executives (and analysts) believe it will take two or three years for demand to recover completely.

This means demand for new aircraft will likely be depressed for the next several years. However, the sale of commercial jet engines accounted for just $9 billion of GE Aviation's $32.9 billion of revenue in 2019, and on average, those sales generate fairly low margins. By contrast, commercial services accounted for $15.2 billion of GE Aviation's 2019 revenue and the vast majority of its profit. This part of the business mainly relates to maintaining existing engines.

In the short term, maintenance revenue has plunged because airlines have dramatically reduced the utilization of their fleets. However, as demand starts to recover, airlines will need to increase aircraft utilization again, particularly because many carriers are retiring older jets (which don't tend to generate much maintenance revenue for GE). That means high-margin services revenue is likely to bounce back relatively quickly: far sooner than sales of new jets (and new jet engines). Jet engine sales will eventually recover, too, as coronavirus is unlikely to permanently reverse the secular growth of global aviation.

GE's other segments should recover from COVID-19 even faster. GE is still a relatively risky investment due to its heavy exposure to aviation and ongoing turnaround work in some of its other divisions. However, the company has the financial strength to withstand a period of weak results, and its business is likely to make a full recovery within a few years. That makes GE stock an intriguing buy for long-term investors now that its market cap has shrunk by $50 billion since mid-February.