Growth in its four businesses and an attractive dividend are two reasons to like this stock.

The coronavirus outbreak has put pressure on medical device companies as hospitals postpone elective procedures to focus on the influx of patients. The effect on Abbott Laboratories (ABT -0.36%), however, may be limited because of the types of medical devices the company sells and the diversification of its businesses. Does this mean Abbott is a buy right now? Let's have a closer look. 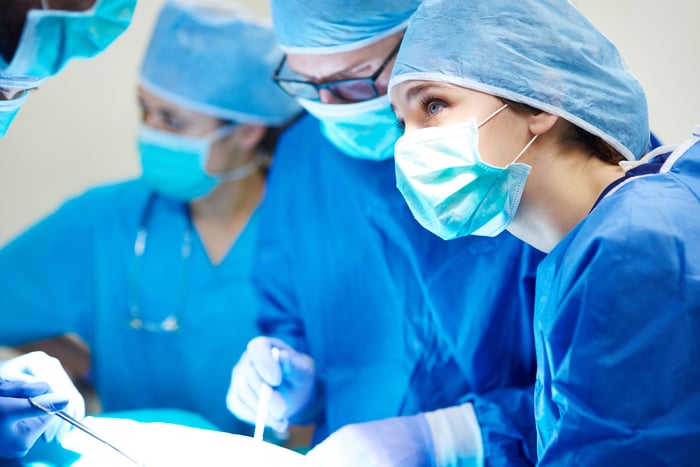 Abbott focuses on four business areas: medical devices, established pharmaceuticals, diagnostics, and nutrition. Though medical devices made up 38% of last year's sales, the other businesses represented between 14% and 24%, for a well-balanced total picture. I like the fact that each business generates a significant portion of revenue. That means if one specialty faces a slowdown, another area may compensate. Even better news is that each of these businesses is growing. In the fourth quarter, medical device sales rose 9.7% year over year, while the other businesses rose between 5% and 7.8%.

Abbott's medical devices are used in a wide variety of procedures. Many of these procedures can't be delayed -- for example, those addressing heart failure or vascular surgery -- meaning the current postponement of non-urgent elective surgeries may have a limited effect on Abbott's business. As for responding to demand for its products, Abbott said it is closely monitoring inventory levels and emphasized that it is highly experienced at minimizing supply disruptions.

Abbott reports first-quarter earnings April 16, and investors will be closely watching for any additional comments about how the coronavirus outbreak may or may not be affecting business. For the moment, we can be optimistic, given that Abbott hasn't issued a warning. While it's possible the company may see a bit of a slowdown, I wouldn't be alarmed by it. The current crisis is disruptive to some degree to most businesses, but in many cases -- and certainly in the case of Abbott -- any disruption would be temporary. Even through a weakening economy, patients still need Abbott's products.

Abbott has a track record of sales growth, with three consecutive years of gains. Last year, organic sales climbed 7.7%, and it's likely this year's increase will be similar according to what the company said in January. At that time, Abbott issued guidance for full-year 2020 organic sales growth of 7% to 8% and GAAP diluted earnings per share of $2.35 to $2.45. Adjusted diluted EPS would be $3.55 to $3.65, the company said. For the first quarter, Abbott predicted diluted EPS of $0.40 to $0.42 and adjusted diluted EPS of $0.69 to $0.71.

A recent boost to Abbott's shares leaves them down only 1% since the start of the year after falling as much as 28% in March. The shares rebounded on news that the U.S. Food and Drug Administration granted Abbott emergency use authorization for its molecular point-of-care coronavirus test. As the fastest test currently available, it can deliver positive results in as quickly as five minutes and negative results in 13 minutes. The test operates on Abbott's ID NOW platform, a device about the size of a toaster that can be used in a variety of locations from hospitals to doctors' offices. The test isn't likely to be the big revenue driver at Abbott, but it's clear it will add to growth -- especially in the near term while the coronavirus threat is at its strongest.

Finally, another reason to like Abbott shares has to do with the company's dividend. In December, Abbott lifted the quarterly dividend by more than 12% to $0.36 a share, raising its dividend payout for the 48th straight year.

Abbott shares are trading at 42 times earnings, slightly lower than peer Edwards Lifesciences (EW 0.20%) (another medical device company that I like), which trades at nearly 45 times earnings. Today, Abbott's P/E remains as cheap as it's been since 2016. For the long-term healthcare investor, that presents a reasonable entry point for a company with solid long-term revenue prospects.