Please ensure Javascript is enabled for purposes of website accessibility
Log In Help Join The Motley Fool
Free Article Join Over 1 Million Premium Members And Get More In-Depth Stock Guidance and Research
By Prosper Junior Bakiny - Updated May 6, 2020 at 10:54AM

The cannabis company is more attractively valued after the recent sell-off, but is now a good time to pull the trigger?

The cannabis industry hasn't escaped the recent market sell-off. The industry as a whole, as measured by the Horizons Marijuana Life Sciences ETF, is down by 30% year-to-date. Aphria (APHA) one of the largest cannabis companies by market cap, has performed slightly worse: Its shares are down by about 30.8% since the beginning of the year.

However, the Ontario-based pot grower is now much more attractively valued than it was just a few months ago. At writing, Aphria is trading at only 2.5 times forward sales, which is a bargain when compared to many of its peers in the cannabis industry. For instance, Canopy Growth (CGC -1.40%) is currently trading at more than 10 times forward sales. Does Aphria's comparatively attractive valuation make the company a buy?

How will the ongoing pandemic affect Aphria?

Aphria is one of the few cannabis companies that has managed to sign supply agreements with every Canadian province. Also, the company's projected peak production capacity is about 255,000 kilograms, making Aphria one of the leaders in this category in the Canadian pot market. Thanks to these factors, Aphria is well-positioned to profit from the cannabis market. In particular, the company is planning to take advantage of the market for derivative products, which officially opened in Canada on Oct. 17. 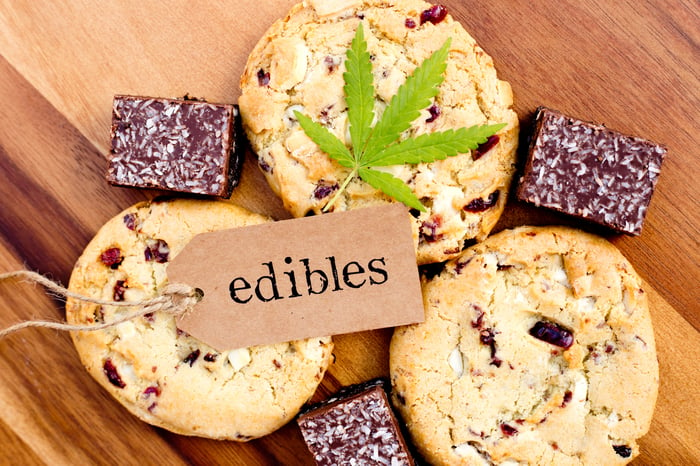 During Aphria's first-quarter earnings conference call, Carl Merton, who at the time was the company's interim CEO (and is currently serving as Aphria's CFO), said, "Our internal models are really based around 60% market share for dried cannabis, 20% to 30% for vapes, and the remainder being split between drinks, edibles, and the other new product formats."

However, the ongoing COVID-19 outbreak is forcing people to stay indoors and reducing foot traffic in physical stores, including legally licensed retail cannabis stores where Aphria's products are sold. In the province of Ontario, which is where Aphria is based, the government has cracked down on business closures and has opted to allow only "essential businesses" to remain open. The government of Ontario initially deemed cannabis stores essential businesses, only to remove them from that list about a week and a half later.

Fortunately, the government eventually reversed course and decided to allow pot stores to reopen for pickup and delivery services. This new verdict is set to last only 14 days, but it could be extended. It is also worth noting that sales of cannabis products have been booming during the pandemic, which means Aphria and its peers in the pot market may not suffer deep financial losses as a result of the outbreak.

Aphria has recorded strong financial results of late, at least compared to most other companies in the cannabis industry. The following table compares some of Aphria's key financial metrics for its latest reported quarter -- the second quarter of its fiscal year 2020 -- with that of two of its biggest competitors, namely Canopy Growth and Aurora Cannabis (ACB 2.27%).

Canopy recorded a net revenue slightly above that of Aphria and also has far more cash on hand. However, Canopy also posted much deeper operating and net losses. Aphria's metrics compare very favorably to that of Aurora Cannabis across the board. Also, Aphria has been the most consistent of the three over the past few quarters in terms of their respective financial results. And given the company's attractive valuation, Aphria may well be the better choice of the three.

Aphria's stock will likely continue to be volatile moving forward, as will much of the cannabis industry. And although Aphria has recorded decent financial results of late, I think its stock remains on the risky side, and only those investors comfortable with a little risk should consider opening a position in Aphria.