Stocks were sharply higher, but financial stocks missed out on the gains.

The stock market moved higher on Tuesday, led by a fairly wide range of industries. Technology stocks were strong, but consumer and healthcare stocks also contributed to big gains for the market. The Nasdaq Composite (^IXIC 0.00%) once again led all major indexes, but the Dow Jones Industrial Average (^DJI 0.00%) and S&P 500 (^GSPC 0.19%) also managed to post gains.

Largely left behind in the rally today were bank stocks, many of which are releasing their earnings this week. JPMorgan Chase (JPM 0.95%) and Wells Fargo (WFC 0.68%) were on the list this morning, while Bank of America (BAC 1.08%), Goldman Sachs (GS -0.25%), and US Bancorp (USB 0.45%) will join them with releases on Wednesday. If B of A and its peers can't do better than JPMorgan and Wells did, then it could be a long week for the financial sector -- and a tough year for shareholders.

What early bank earnings releases have already told us

The news today from JPMorgan and Wells showed the challenges that banks are facing. JPMorgan reported a 3% drop in net revenue, but the bank dramatically boosted its allowances for credit losses, with a total of $8.3 billion representing a fivefold increase from year-ago levels. The banking giant blamed not only the coronavirus pandemic's economic fallout but also plunging oil prices for the increase. As a result, net income was lower by 70% year over year.

Investors didn't take any solace from the fact that some fundamentals of JPMorgan's business looked strong. Loan volume, deposits, investment assets, and credit card sales were all higher for the quarter. Trading volume stemming from volatile markets also helped cushion the blow for the bank's operations. 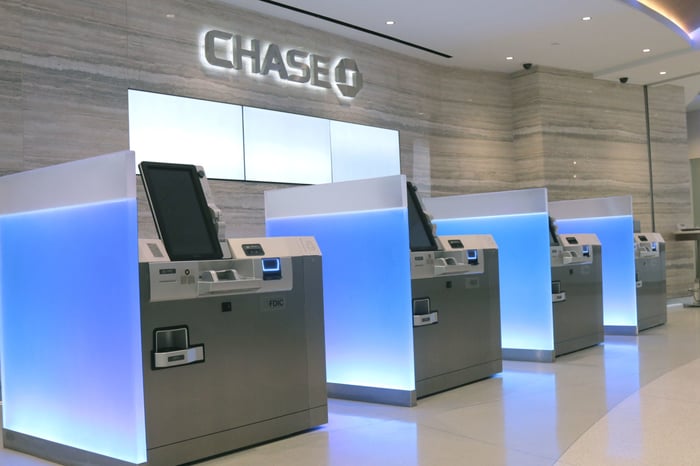 Wells took an even bigger hit to its bottom line, with two sets of issues hurting the bank. Wells added $3.1 billion to its loan loss reserves, but it also took a $950 million impairment charge for securities in its portfolio. That led to earnings of just $0.01 per share, down from $1.20 per share in the year-earlier quarter. Charge-offs and loans 90 days or more past due climbed substantially, and unfortunately, Wells didn't see the same rise in trading revenue that JPMorgan did. Wells stock fell 4%.

Will other banks get hurt?

For banks on deck with their own earnings, the losses weren't as severe. Bank of America dropped less than 1%, even though investors see its earnings per share falling by a third from year-ago levels. That represents a significant downgrade just in the past week as investors have seemed to acknowledge the reality of the situation for the financial industry. Similarly, Goldman was down just 0.5% as shareholders brace for a likely 40% drop in the Wall Street giant's bottom line. US Bancorp took the biggets hit, falling 3% in anticipation of a similar-sized decline in earnings.

The less dramatic drops hold out hope that these three banks could buck the trend that Wells and JPMorgan set. For B of A and Goldman, substantial trading operations could offer similar consolation to handle any losses from added loan provisions. The fact that Goldman is just now starting to ramp up its retail banking operations could be fortuitous, as it could insulate the company from some of the factors that more retail-centered banks like B of A and US Bancorp face.

Bank stocks face a tough environment, with low rates limiting their ability to earn net interest income. That caps potential growth, making them look less attractive than stocks in other sectors with better prospects. With the possibility of falling earnings throughout 2020, the chance of big banks being value traps is high enough to steer many investors clear of the sector entirely.