Please ensure Javascript is enabled for purposes of website accessibility
Log In Help Join The Motley Fool
Free Article Join Over 1 Million Premium Members And Get More In-Depth Stock Guidance and Research
By Jeremy Bowman - Apr 15, 2020 at 9:10AM

The cable giant is joining the streaming fray, but it faces some coronavirus-related headwinds.

After announcing its new streaming service in January, Comcast (CMCSA -0.52%) launched Peacock on Wednesday for Comcast subscribers before rolling it out nationally in July.

The service joins a parade of new streaming competitors -- Apple and Disney (DIS 0.56%) launched their own services last fall -- and comes at a time when streaming is in greater demand than ever before. With lockdown orders in effect across most of the country, Americans are hungry for home entertainment, which has led to a spike in streaming activity. According to data from streaming aggregator Reelgood, streaming activity from its 4 million members doubled from the beginning of March to the end of the month, and Roku (ROKU -0.31%) saw viewing hours jump 49% in the first quarter, with a surge at the end of March. Disney+ reached 50 million subscribers globally just five months after its launch, and European governments asked Netflix (NFLX -1.37%) to downshift to standard definition to avoid straining the continent's internet infrastructure. Comcast itself even said it had said seen a 50% increase in on-demand consumption during the pandemic.

However, despite streaming's surging popularity, Comcast's launch comes with something of a warning for the rest of the streaming universe. 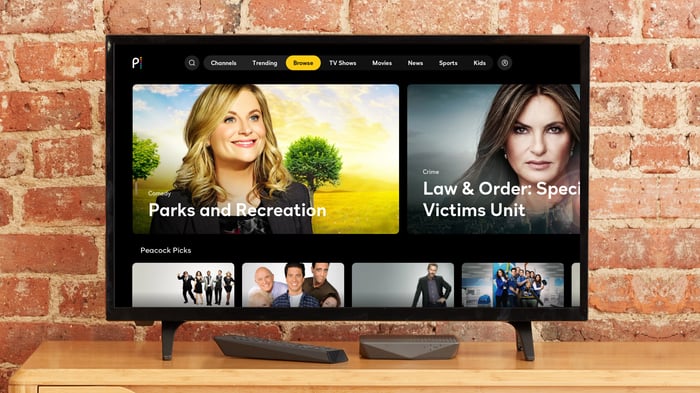 Peacock was aiming for a full-on launch of its new streaming service this year, but with the coronavirus pandemic suspending virtually all new TV and film production, Comcast will delay much of the new original content that was set to launch on Peacock until next year. According to The Wall Street Journal, Peacock Chairman Matt Strauss said on a call to the press, "The majority of our original productions, like virtually all productions across the world, have been paused," and added that the service's content slate would be "materially limited" this year.

Instead of leading with original content, the service will rely on staples from the NBC library like Parks and Recreation, 30 Rock, and Law and Order. Peacock's free tier will still have 7,500 hours of content, giving streaming customers plenty to binge on, while the ad-supported premium tier, which is free for Comcast subscribers and $4.99/month for other customers, comes with 15,000 hours of content.

Peacock's dependence on advertising underscores another challenge that Comcast is facing. With businesses shuttered and consumers stuck at home, the advertising market is starting to dry up. Roku said in its recent announcement that it expects some marketers to pause or reduce advertising in the near term, and Facebook also noted that ad revenue has slowed even while user activity has grown. Meanwhile, media outlets are laying off staff and even shutting down as ad revenue has sharply declined.

With the pipeline for new Hollywood content coming to a halt, streamers like Netflix will eventually face a problem similar to Peacock's as viewers begin to tire of stale content. Though that won't be enough to drive subscribers away when stay-at-home orders are in effect, it may lead to some churn when daily life starts to return to normal.

Meanwhile, advertising challenges mean that subscriber-based platforms like Netflix, Disney+, and Amazon Prime Video will have an advantage over ad-supported services like Roku, Hulu, and now Peacock.

There may also be a silver lining in the shutdowns, which have not just delayed Hollywood production, but also shut down movie theaters, leaving no good choices for studios set to release movies in the coming months. Some studios have gone to streaming services like Netflix, Hulu, and Amazon in search of buyers for movies that may not make it to the silver screen.

For Comcast, Peacock is a natural extension of a company that owns NBC and is a leading cable and broadband provider, and it should help pad its performance at a time when its theme parks are shut down. The muted launch, however, means investors will need to temper their expectations for the new streaming service, and other streamers could soon face those challenges as well.