The race for video conferencing supremacy looks like it's starting to heat up in a big way, with big tech names staking out their claims by refining their video calling features.

It's increasingly difficult to say Alphabet (GOOG -0.73%) (GOOGL -0.68%) isn't taking the work-at-home movement seriously. On Thursday, its flagship brand Google updated its video conferencing platform Meet to make it look more like the one offered by Zoom Video Communications (ZM 1.27%). As part of the overhaul, the company also integrated Meet with its Gmail email service. Google vice president Javier Soltero told Reuters that was just one of several new Meet features being launched while the COVID-19 outbreak has forced millions of people to work from home.

The pandemic has rattled businesses in a way they weren't quite prepared for. Most employees remain healthy and are able to work remotely, but with coronavirus-related shutdowns now being measured in weeks, real-time and face-to-face communication is becoming necessary. The aforementioned Zoom was one video conferencing option, but a major security flaw was discovered last month that sent many users scrambling for alternatives. Google, in fact, banned the use of Zoom on its company laptops. 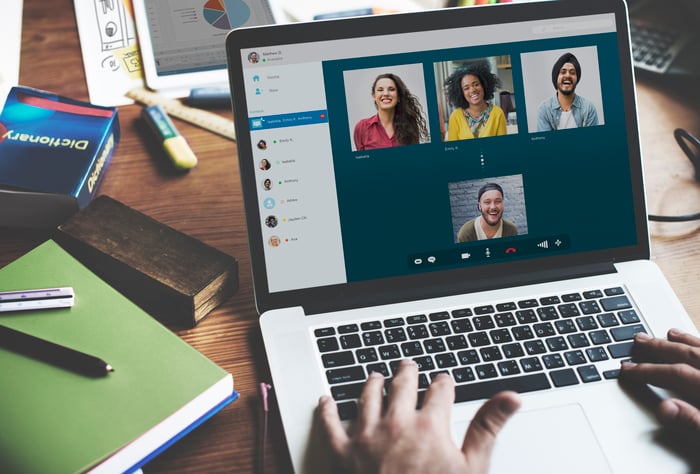 Google has undoubtedly benefited from the contagion's impact. A week ago, Soltero wrote "Earlier this week, we surpassed a new milestone, with more than 2 million new users connecting on Google Meet every day." Underscoring the company's response to this quickly unfolding opportunity is Google's recent request to trademark the term "Google Meet."

Alphabet isn't the only major technology name chasing the new video conferencing opportunity, however. Microsoft (MSFT -0.44%) has ramped up promotion of its Teams platform, which facilitates a variety of online, remote communication. Verizon (VZ -0.10%) also announced on Thursday it would be acquiring a video conferencing company called BlueJeans.