Please ensure Javascript is enabled for purposes of website accessibility
Log In Help Join The Motley Fool
Free Article Join Over 1 Million Premium Members And Get More In-Depth Stock Guidance and Research
By Howard Smith – Apr 17, 2020 at 11:38AM

The aerospace company details a plan to safely ramp up operations in Puget Sound.

After suspending operations at both of its domestic commercial plane manufacturing plants, Boeing Co. (BA -3.39%) has announced an approach to phase in the resumption of operations, beginning at its plant in Washington state. Operations at its South Carolina plant will remain suspended.

When the company announced the shutdown of operations at the South Carolina 787 Dreamliner plant last week, it also extended the outage in Washington. Now the plan is to restart production in Washington with a detailed list of new practices and procedures to protect workers from COVID-19 infection. 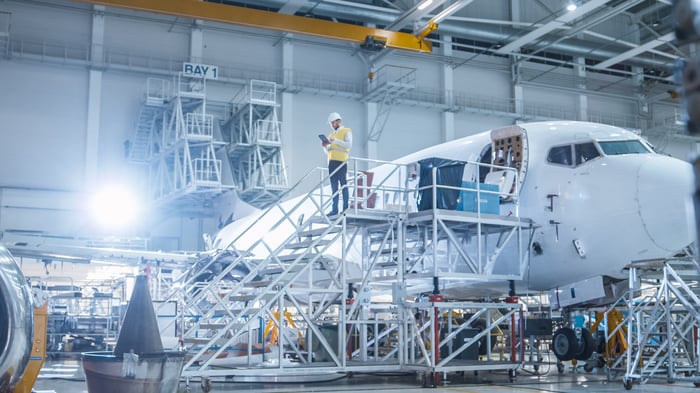 The Washington facility at Puget Sound will bring back workers for the 747, 767, 777 and 787 programs there, while the 737 program will continue to work on bringing back the 737 Max.

President and CEO Dave Calhoun said in a statement that the company is now able to work toward a medium and long-term production plan after the U.S. government and 10 airlines have agreed on an aid plan following approval of the CARES Act. He urged other governments around the world to "follow the lead of the U.S. and support their aviation industry in a similar fashion."

While 27,000 people work at the Puget Sound facility, Calhoun pointed out that the industry as a whole is vital to the economy, with 17,000 suppliers and 2.5 million jobs.