Given the unpredictable fallout from the coronavirus pandemic, fear-based selling of stocks came as no surprise in March. Banks and brokerage firms were certainly no exception. JPMorgan Chase & Co. shares tumbled more than 40% from peak to trough. At one point, Goldman Sachs was off more than 40% from its February peak as well. Online-trading powerhouse Charles Schwab (SCHW 1.74%) suffered a similarly sized setback in March.

Schwab's recently reported first-quarter results, however, serve as a much-needed reminder that at least some of these brokerage names -- and Charles Schwab in particular -- fare a little better in tough times than some investors might figure. Yes, stock trading is still done when stocks are falling, but that's not the most noteworthy nuance of Schwab's quarter in question; Schwab stopped charging commissions on most trades last year. The one big takeaway from Charles Schwab's fiscal Q1 numbers is that this is a fee-driven company that just wants to hold on to its clients' money, no matter how it's allocated. 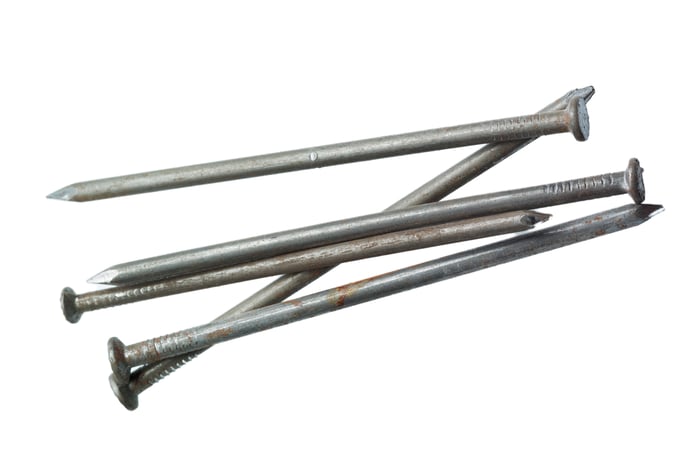 Schwab's revenue base is built to last

The not-so-great news: Schwab's top line of $2.62 billion for the three-month stretch ending in March was just a hair behind analysts' estimates of $2.63 billion, and down 4% from the year-earlier comparison of $2.72 billion. While earnings of $0.58 per share were notably less than the $0.63 per share that had been modeled and well under Q1-2019's figure of $0.69, it was really anybody's guess as to how the quarter was affected by the COVID-19 contagion. Besides, the broker's per-share bottom line would have been $0.02 better had the company not had to shell out $27 million solely in response to the coronavirus outbreak.

Largely lost in the discussion is the fact that the biggest chunk of the company's top line isn't subject to market conditions or interest in buying or selling stocks. It's interest earned on assets. Trading commissions aren't the second-biggest business Schwab operates, either. That's asset management. No, commissions are the broker's third-biggest business ... a distant third.

The graphic tells the tale. 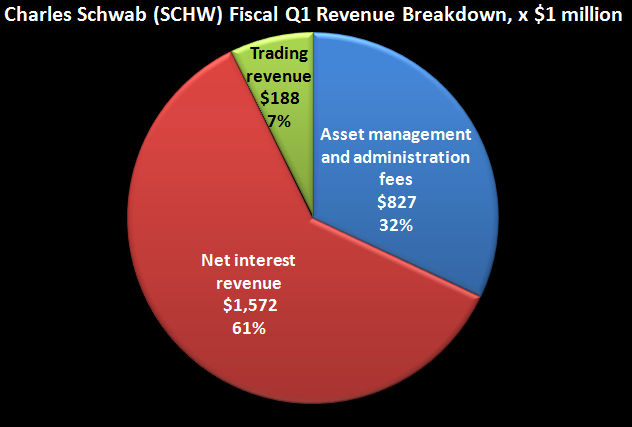 Don't read too much into the message. Charles Schwab's fee-based and interest-based business are still subject to market conditions. The net interest-based revenue of $1.7 billion last quarter reflected an average net yield of 2.14%. In the comparable quarter a year earlier, interest-bearing assets put just under $2 billion on the top line, thanks to an average net yield of 2.46%. Something is better than nothing though, and there's even one upside to interest rates' slide in between the two quarters -- it also lowers Schwab's net interest expense. That cost fell from $317 million to $136 million last quarter.

As for asset management and administrative fees, that business grew from $755 million to $827 million. The only real risk in serving as a custodian to money managers as well as operating a mutual fund business is the ebb and flow of the market itself. Payments to Schwab from its money managers and fund customers are relatively fixed, only affected by the rising or falling value of those underlying portfolios.

Outright trading commission revenue fell from $217 million to $188 million, which, all things considered, isn't too bad. Although the COVID-19 outbreak likely spooked some investors out of the market who've yet to make their way back in, they're still out there, holding cash. Schwab says its clients are collectively sitting on more than $203 billion worth of money market holdings, up from $160 billion a year earlier. Money market funds bear interest for Schwab as well.

It's a compelling revenue mix that's frequently overlooked within an industry that tends to rely a little more on trading and a little less on fees and interest payments. While the company can be, and is, affected by changing market conditions, it takes a pretty nasty rout to uproot Schwab's reliable results.

And that's not likely to change once TD Ameritrade (AMTD) becomes part of the Charles Schwab family.

The acquisition was announced last year, and while the ripple effect of the coronavirus contagion may delay it, it won't likely derail it. Schwab should be able to proceed with the integration of the rival broker with a surprisingly similar revenue base. Of its first fiscal quarter's $1.3 billion in revenue, $454 million came from bank deposit fees, and another $359 million was driven by interest payments. Another $145 million came from investment product fees. Trading fees and commission of $305 million only accounted for about one-fourth of its total top line. 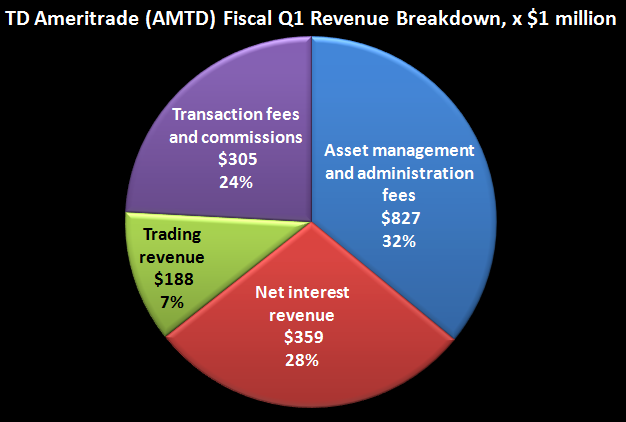 In other words, TD Ameritrade's business is almost as steady and predictable as Charles Schwab's current revenue mix.