Please ensure Javascript is enabled for purposes of website accessibility
Log In Help Join The Motley Fool
Free Article Join Over 1 Million Premium Members And Get More In-Depth Stock Guidance and Research
By Timothy Green – Apr 17, 2020 at 8:25AM

Expectations for the PlayStation 5 are being reeled in.

There isn't much of a bull case for troubled video game retailer GameStop (GME -2.24%). The company was struggling mightily before the coronavirus pandemic as video game purchases shifted from physical discs to digital downloads. GameStop's lucrative used-games business, long a cash cow, has been in decline for years. With the company's stores now limited to curbside pickup, already tumbling sales will likely tumble further.

GameStop's sales will probably get a boost during the 2020 holiday season due to the scheduled launches of two new game consoles, the Xbox Series X from Microsoft and the PlayStation 5 from Sony (SONY -2.53%). Assuming GameStop's stores are open by then, the new consoles will drive traffic and sales of hardware, software, and accessories.

At this point, the bull case for GameStop is:

The bear case, in short, is that a chain of thousands of stores selling physical video game discs makes no sense anymore and GameStop is facing an existential crisis with little chance of a sustained turnaround. Strong balance sheet or not, the core business is doomed. 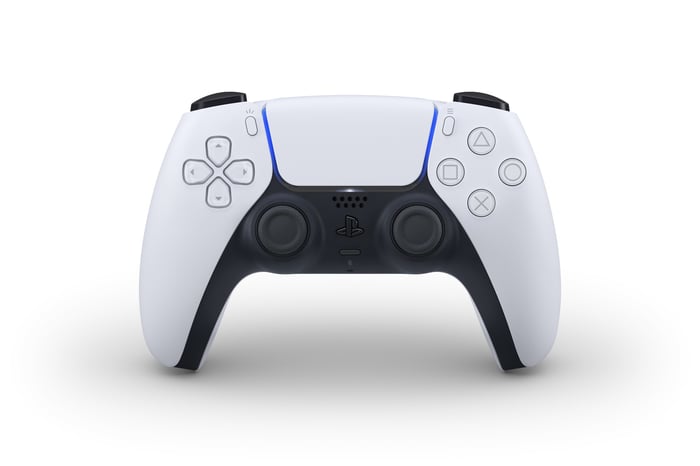 The DualSense controller for the PlayStation 5. Image source: Sony.

The bull case takes a hit

The third part of the bull case for GameStop was weakened on Thursday after Bloomberg reported that Sony was limiting its initial production run for the PlayStation 5. The company has reportedly told assembly partners of plans to manufacture 5 million to 6 million units for the fiscal year ending in March 2021. In the two quarters following the launch of the PlayStation 4 in 2013, Sony sold 7.5 million units.

The issue is not production capacity, according to Bloomberg's sources, but demand. Sony is expecting a high price point to reduce demand for the new console. While the company hasn't announced pricing yet, game developers are anticipating a launch price between $499 and $549. Increased component costs are complicating Sony's pricing decision.

On top of a high price, Sony's promotional activities surrounding the PlayStation 5 may be limited due to the pandemic. And while no PlayStation 5 games have been delayed so far, Sony did warn about the possibility in a statement in late March. Game delays would further limit the appeal of the new console.

There may not be much appetite for a $500+ game console in the U.S. if the economy is still in rough shape when the holiday season rolls around. That doesn't mean the console won't eventually be successful, but sales may be more spread out compared to previous launches.

This is all bad news for GameStop. The company doesn't make much money selling hardware, but strong demand for the game consoles will be necessary to drive sales of higher-margin products like games and accessories. If GameStop has a weak holiday season this year, the bull case pretty much goes out the window.