Please ensure Javascript is enabled for purposes of website accessibility
Log In Help Join The Motley Fool
Free Article Join Over 1 Million Premium Members And Get More In-Depth Stock Guidance and Research
By Lou Whiteman – Apr 17, 2020 at 11:18AM

The airline, famous for its good relations with workers, is worried traffic won't return by the Fall.

Southwest Airlines (LUV -1.36%) has reportedly reached out to union leaders to discuss possible concessions once government bailout funds are exhausted.

Southwest and other airlines have been hard hit by the COVID-19 pandemic, which has caused travel demand to fall upwards of 95% year over year. The U.S. federal government has authorized $50 billion in bailout funds to try to get the industry through the downturn without layoffs, but company officials are increasingly skeptical that the package will be enough to avoid taking other actions.

Southwest is expected to receive $3.2 billion in direct support from the government and a $1 billion loan to help it make payroll. The funds are conditioned on the airlines doing no layoffs or furloughs through Sept. 30, among other requirements. 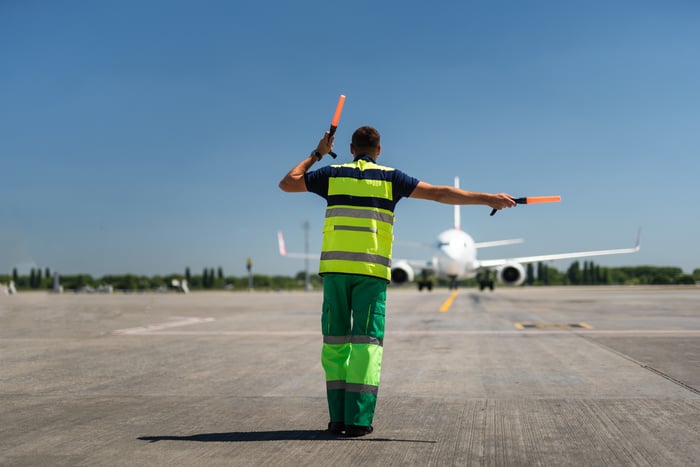 Southwest has approached its unions to open dialogue about potential concessions should traffic not return by the Fall, Reuters reports. The company did not disclose the specifics of what it was seeking, but union leaders said pay cuts and other measures were on the table.

Southwest is hardly alone in voicing concerns that conditions won't normalize by the end of September. Management at United Airlines Holdings has warned employees that they don't expect a quick rebound in travel, saying "we have some tough decisions ahead as we plan for our airline, and our overall workforce, to be smaller than it is today, starting as early as October 1."

American Airlines Group has been more sanguine, with CEO Doug Parker telling CNBC on Wednesday that bookings for travel later in the summer are beginning to "tick up a bit," connoting a gradual recovery in the third and fourth quarters of 2020.

Southwest's actions are notable in part because the airline is considered among the best run companies in the industry, and its shares -- down "only" 40% -- is the best performing stock in the sector for the year. Southwest has also never in its 49-year history resorted to layoffs, furloughs, or pay cuts, keeping its entire staff on board even following the attacks of Sept. 11.