Please ensure Javascript is enabled for purposes of website accessibility
Log In Help Join The Motley Fool
Free Article Join Over 1 Million Premium Members And Get More In-Depth Stock Guidance and Research
By James Brumley – Apr 17, 2020 at 8:20AM

The strategy may crimp hardware margins, but profits on digital services could soar on a scaled-up user base.

It's official. Apple (AAPL -3.67%) is finally offering its long-anticipated budget-minded iPhone. The newest iPhone SE, unveiled on Wednesday, starts at a price of $399, which pits it directly against similarly priced (and extremely popular) Galaxy smartphones from Samsung (OTC: SSNLF). And even the most expensive new iPhone SE is still relatively affordable, retailing for $549.

It's a double-edged sword for Apple, of course. While the latest iteration of the iPhone is essentially an iPhone 8 using some proven and available components from the latest iPhone 11, they're still not cheap to make. Estimates of the production cost of the iPhone 8 were just a little below $300 according to IHS Markit, while TechInsights reckons the iPhone 11 requires about $500 worth of components. Shipping, overhead, and other expenses add to the total cost of getting one of the devices into a consumer's hands. Certainly, some of those technology costs have been whittled down in the meantime, but not dramatically so. 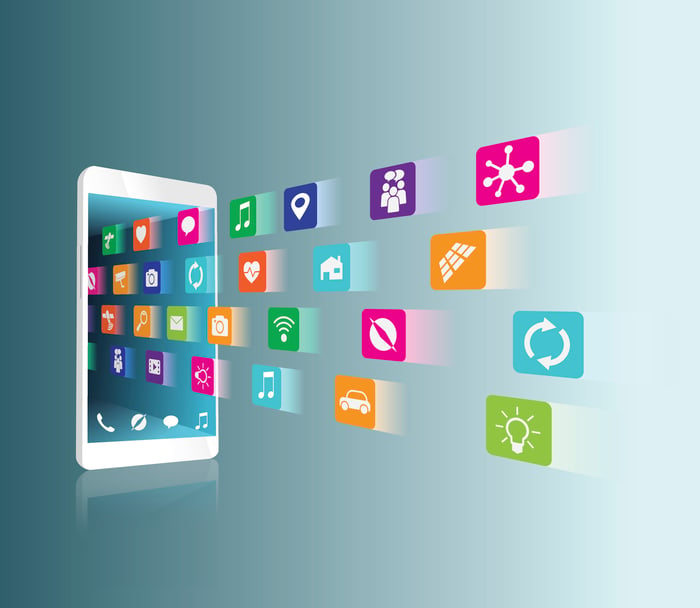 Profits on hardware may be a shrinking priority for Apple, however. The company is going all-in on apps and the revenue they drive, and with smartphone saturation turning into a headwind, Apple is now taking aim at Alphabet's (GOOG -2.61%) (GOOGL -2.70%) ecosystem. That crowd isn't quite as valuable to Apple as Apple's existing die-hard iPhone fan base, but there sure are a lot more of them.

It's all about the back end

Apple has gotten very, very good at extracting ongoing revenue from iPhone owners. Sensor Tower reported late last month that the average iPhone owner spent around $100 on and through apps in 2019, more than doubling 2016's figure of $47.

Apple has to split that revenue up with app developers and the companies behind app-based subscriptions, like Netflix. With 1.5 billion actively used iOS devices out there though -- the bulk of them being iPhones -- the nickels and dimes start to add up.

There are limits, however. Most anyone in the world who wants and can use a smartphone likely has one. If Apple wants to continue growing its business, it's going to have to take some away from rival phone maker Samsung and rival mobile operating system platform Android, owned by Alphabet's Google.

A lower-priced device works toward both goals.

They aren't the most lucrative of customers, for the record. While Google suggested there were 2.5 billion Android devices in use around the middle of last year, the overwhelming lead in terms of its raw number of users didn't help Google drive more app revenue. Sensor Tower's report noted that global spending on and through iOS apps last year reached $54.2 billion, versus only $29.3 billion spent at Google Play despite a far greater number of Android devices currently in consumers' hands. Google was even able to induce nearly three times as many actual app downloads as Apple's App store last year.

It didn't matter. Android's value-minded fans just aren't spending as much as iOS users are.

If any outfit can change that dynamic, though, it's arguably Apple. Again, Apple doubled per-user app spending between 2016 and 2019, and the $100 worth of spending spurred last year is exactly $100 more than was being spent when Apple debuted the iPhone in 2007 (before the word "app" had even entered the average consumer's lexicon).

It's still unlikely Apple will be able to convince these newcomers to its ecosystem to loosen their purse strings by $100 per year. The consumers are, by definition, specifically looking to save a few bucks. But if the company can draw out just $50 per year from these new iOS users, it's another $50 per head from an addressable market consisting of around 1 billion people.

The debut of the new iPhone SE will obviously affect Apple's hardware sales, but only once. The number to watch is that of the company's service division, which racked up $12.7 billion in revenue during the quarter that ended in December. Apple has already achieved the goal of $50 billion in annual service sales that it first mentioned in 2017, when its app and digital content business was still something of an afterthought.

It's considerably less than the $79 billion worth of hardware the company sold during the final quarter of calendar 2019, but it's still a respectable business. There's so much more potential ahead, however, for this Apple arm. Fellow Fool Adam Levy pointed out in January that Wedbush was expecting Apple's services revenue to hit $60 billion next year, and Evercore ISI believes Apple's services could be driving $100 billion in annual revenue by 2024.

Given the impending availability of a much more affordable iPhone that doesn't skimp on performance, those outlooks are anything but out of line.