With the COVID-19 pandemic driving record levels of usage for video-calling and videoconferencing platforms, telecommunications and media conglomerate Verizon (NYSE:VZ) wants in. Big Red announced this week that it has entered into an agreement to acquire BlueJeans, an enterprise videoconferencing and event platform, in a deal that will expand Verizon's existing unified communications offerings.

BlueJeans competes with Zoom Video Communications (NASDAQ:ZM), which has exploded into the forefront of videoconferencing in recent months. Zoom has seen maximum daily meeting participants skyrocket by 20-fold, and analysts have pointed out that the surge in demand will inevitably attract competition. 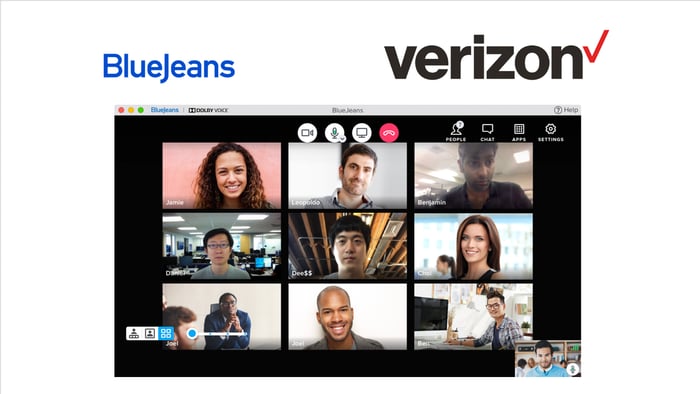 Verizon did not directly disclose financial terms, but The Wall Street Journal reported that the price tag was less than $500 million. The company confirmed that threshold to TechCrunch. The deal is expected to close in the second quarter.

Other enterprise collaboration tools like Slack and Microsoft Teams are also seeing a massive influx of users. Verizon's Business segment generated $31.4 billion in revenue last year, or about 24% of overall revenue.

"As the way we work continues to change, it is absolutely critical for businesses and public sector customers to have access to a comprehensive suite of offerings that are enterprise ready, secure, frictionless and that integrate with existing tools," Verizon Business CEO Tami Erwin said in a statement. "Collaboration and communications have become top of the agenda for businesses of all sizes and in all sectors in recent months."

Verizon has a spotty track record with acquisitions, with purchases like Yahoo! or go90 standing out as particularly spectacular failures. When the company named Hans Vestberg CEO in 2018, the chief executive vowed to focus on building a 5G network instead of chasing more media-related blockbuster acquisitions. At less than $500 million, BlueJeans is a fairly small purchase for Verizon, and investors should be relieved that the deal has nothing to do with media or entertainment, where most of its acquisitive missteps have been concentrated.

Strengthening the enterprise segment is a smart move, as those customers will be less impacted by the looming recession that the coronavirus crisis is likely to cause.

However, there are some valid concerns that Verizon may also undermine competition by zero-rating its own videoconferencing offerings. Zero-rating is when a company exempts a service from data caps, effectively favoring one service over another and violating net neutrality principles. Regulators have previously chastised Verizon for the practice.

At the same time, Verizon is trying to further differentiate itself from T-Mobile, which recently closed its megamerger with Sprint to become a far more formidable competitor. That deal closed earlier this month, and the combined company has made it clear that it plans to more aggressively woo business customers.