Please ensure Javascript is enabled for purposes of website accessibility
Log In Help Join The Motley Fool
Free Article Join Over 1 Million Premium Members And Get More In-Depth Stock Guidance and Research
By David Jagielski – Apr 19, 2020 at 9:15AM

It wouldn't be a surprise if it took at least another four or five years.

There's one thing that can save pot stocks from their freefall during the past year: The federal legalization of the U.S. marijuana market. Unfortunately, recent developments have made that a distant reality. Investors who were hoping that their investment in the industry will pay off thanks to the industry's near-term growth as a result of a larger legal pot market are likely going to be disappointed. Here are two big reasons investors shouldn't expect U.S. legalization of recreational pot use to take place anytime soon:

1. The upcoming election isn't likely to change much

Earlier this year, there was a lot of optimism as there were many candidates vying for the presidency who were in favor of legalizing cannabis. However, with Bernie Sanders dropping out of the race earlier this month, that's left Joe Biden as the likely Democratic nominee, an unlikely candidate to legalize pot.

For the cannabis industry, Biden's the most underwhelming choice. In the past, he's referred to marijuana as a "gateway drug," and while he's since backed off that claim, there are still many question marks surrounding what he would do on marijuana reform if anything. He opposes outright legalization, but there's a chance he could move to decriminalize pot. If he beats President Trump in this year's election, it's unclear if there would be any significant progress for the cannabis industry. And if he loses and Trump is re-elected, the status quo will remain for the foreseeable future.

Either way, there's little reason for investors to expect a big change as a result of the presidential election. 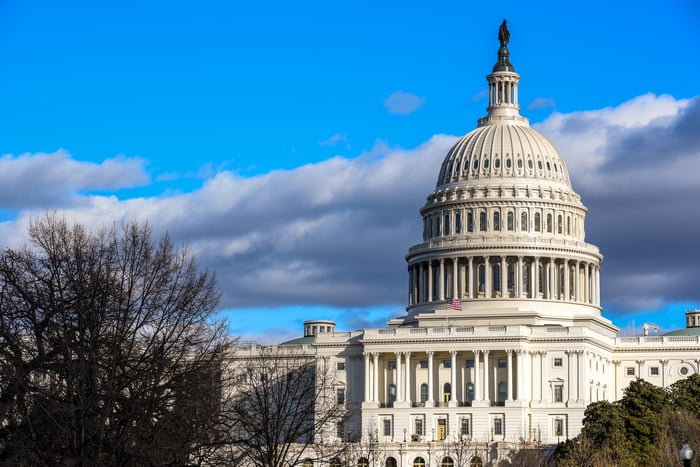 2. Coronavirus and recession will take priority

Even if the U.S. president warms up to cannabis legalization, it won't be a top priority, anyway. That's because the coronavirus pandemic isn't going away anytime soon. And if a vaccine or treatment isn't found, researchers say that social distancing could be a part of our day-to-day lives even in 2022, which won't be good news for the economy.

That may be the worst-case scenario, but even if it doesn't come to fruition, the pandemic will have an impact on the economy long after the immediate crisis has subsided. A recession is already likely, and it's just a matter of how bad it will be. When Wells Fargo (WFC 3.38%) released its earnings results earlier this month, the bank said it wasn't sure how long the downturn might last. CEO Charles Scharf stated on the company's earnings call, "While there is hope that this is time-bound by shelter-in-place orders, we don't know what the time frame is or how quickly the economy will recover when these orders are lifted. What we do know is the contraction is real."

Whoever the president will be after the next election will likely be focused on improving the economy and creating jobs. That will inevitably push any effort to legalize marijuana, assuming there is one, down the list, and make it less likely to happen within a few years. And that's assuming that the president is in favor of legalization, which at this point remains a long shot.

Does this mean investors should ditch pot stocks?

Marijuana legalization would've been on the back burner, even for a president in favor of it. The coronavirus pandemic ensures that the issue will not be front of mind for politicians.

It's disappointing for Canopy Growth (CGC 6.59%) investors who saw the U.S. as a big opportunity for the Canadian-based company to further grow its sales and compete in the larger U.S. pot market. Canopy Growth was very bullish in the past about the U.S. market, and it even announced a deal last year to acquire Acreage Holdings for $3.4 billion. But the acquisition would be contingent on the federal legalization of cannabis in the U.S.

For now, investors are still waiting on the legalization day to happen. However, that doesn't mean that investors can't buy pot stocks today or that they should sell the ones they own. Once there's news of potential legalization in the U.S., cannabis stocks will take off in a hurry, and by then would-be investors may have missed the opportunity to earn significant returns. Buying and holding pot stocks today could be a good long-term strategy for investors who have the patience and financial ability to do so.

However, investors should be careful when choosing a pot stock to ensure that it's in a strong financial position. With more than 1.5 billion Canadian dollars on its books as of Dec. 31, Canopy Growth is one of the better-positioned stocks to withstand the impact of the coronavirus and succeed over the long term. The stock is trading at levels not seen since 2017. It's down 31% year to date, which is a bit better than the Horizons Marijuana Life Sciences ETF, which has declined by 36%. Buying and holding Canopy Growth stock today could set investors up for strong returns later on. Just don't expect them to be realized anytime soon.