The coronavirus pandemic has shone a spotlight on the leader in telehealth, or virtual healthcare.

The coronavirus pandemic has made telehealth a timely topic. Patients are being encouraged by prominent health experts and government officials to access advice from healthcare professionals via telephone or video chat rather than in-person, when possible, in order to slow the spread of COVID-19.

People are heeding that advice. On Tuesday, Teladoc Health (TDOC 1.51%), the industry's global leader and the only publicly traded company focused on virtual healthcare, said that it's "now routinely providing in excess of 20,000 virtual medical visits per day in the United States, representing an increase of over 100% as compared to the first week of March."

The global spotlight on telehealth has lit a fire under Teladoc stock, which has surged 107% in 2020 through Friday, April 17. The S&P 500 (including dividends) has dropped about 15% over this period.

So is Teladoc Health a good stock to consider buying? Could it even have the potential to make everyday investors millionaires? 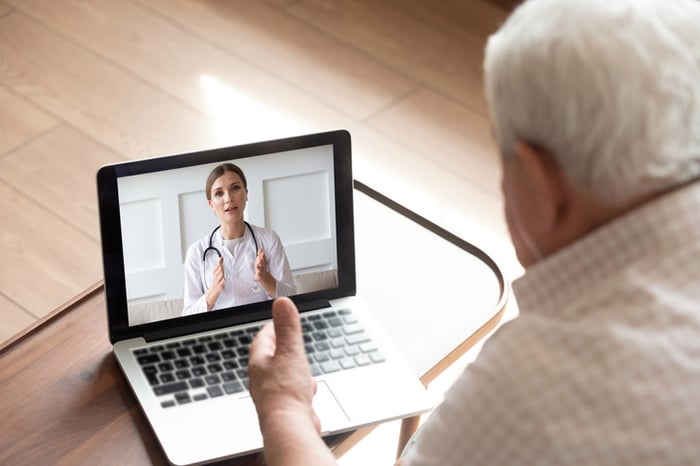 Teladoc was founded in 2002 and held its initial public offering (IPO) in July 2015. Its platform enables its more than 35 million members across 175 countries to connect around the clock via telephone or video conferencing to physicians and mental health professionals. In 2019, more than 4.1 million virtual care visits were completed on its platform. This tally is poised to skyrocket in 2020 due to the pandemic.

Teladoc's customers include more than 40% of Fortune 500 companies and thousands of smaller employers. More than 50 U.S. health plans cover Teladoc's services, and more than 70 global insurance and financial services firms offer its services to members. And more than 300 hospitals and health systems work with the company to provide virtual care to their patients.

Data source: Teladoc Health and Yahoo! Finance. MRQ = most recent quarter (Q4 2019); the company reported preliminary results for Q1 2020 this past week, but they were neither full nor official results. Data as of April 17, 2020.

Teladoc's revenue has been growing at a rapid clip. It grew at a 55% compound annual growth rate (CAGR) from the company's IPO year of 2015 through 2019.

The company is not profitable from an accounting standpoint, meaning its net income and earnings per share (EPS) are negative. That's because it's been investing in growth initiatives, including making many acquisitions that have added depth and breadth to its services. This is a common dynamic for technology-related companies in their early years of being publicly traded. Sometimes this phase can last for quite some time and doesn't mean the company will never be profitable. (Amazon.com is a perfect example.)

Wall Street expects Teladoc's earnings to grow at an average annual pace of 20% per year over the next five years. More accurately, analysts expect the company's loss per share to narrow at this rate, as Teladoc isn't expected to be profitable within five years.

There's an important "but" that you should know: Net income is negative, but cash flows have recently become positive. Net income, or "earnings," are mere accounting measures, which makes cash flows a better indicator of a company's financial health, at least over the long term. 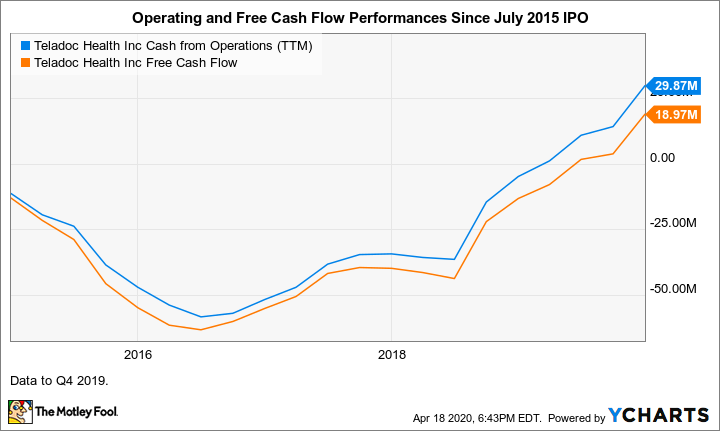 The company generated revenue of $553.3 million last year. That's just 1.1% to 1.4% of its estimated TAM, so it has massive growth potential. As the clear industry leader, Teladoc should be able to capture a good chunk of the industry's TAM.

Thanks to the company's massive TAM and leadership position, Teladoc stock seems to have the potential to turn some everyday investors into millionaires. At the least, it has the potential to continue to be a huge winner.

The shift toward telehealth services was already underway before the pandemic, and the crisis has accelerated it. Most patients like not having to physically visit a healthcare provider unless necessary, and employers, insurers, and hospitals and healthcare systems appreciate virtual healthcare's increased efficiency.

Mark your calendar: Teladoc is slated to release its official full results for the first quarter of 2020 and an updated financial outlook on Wednesday, April 29.