Please ensure Javascript is enabled for purposes of website accessibility
Log In Help Join The Motley Fool
Free Article Join Over 1 Million Premium Members And Get More In-Depth Stock Guidance and Research
By Rick Munarriz – Updated Apr 21, 2020 at 7:02AM

It's earnings season, and the top dog in premium video streaming has a lot to like -- but one thing to dislike -- heading into this week's financial update.

Momentum is bullish heading into Netflix's (NFLX -4.49%) first-quarter report on Tuesday afternoon. The stock hit an all-time high on Thursday, and expectations are elevated for the leading premium streaming service.

There's plenty to like here. Let's go over a couple of reasons to get excited about the fresh financials Netflix will put out shortly after Thursday's close. Let's also go over one reason for investors to be cautious heading into that important update. 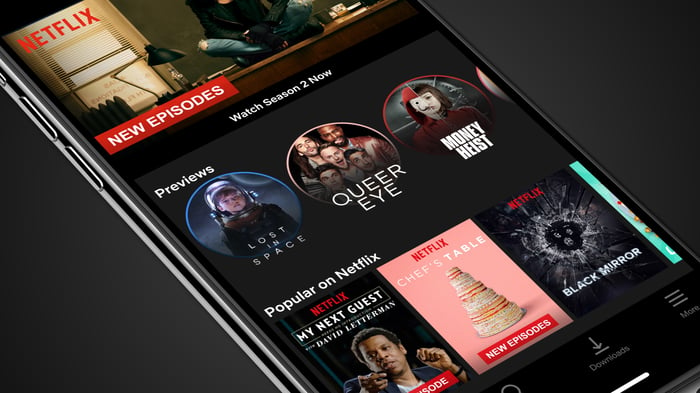 1. Subscriber numbers should finally be on point

You would think a stock hitting all-time highs in a sluggish market would be nailing the past few quarters, but Netflix has fallen short of its historically conservative guidance for domestic paid subscriber net additions in each of the past three quarters.

The second quarter last year was a doozy, with a rare net decline in domestic subscribers. The third quarter was another dud, but at least Netflix managed to close out the period with more stateside streaming accounts than it had three months earlier. The fourth quarter was the lightest of the three whiffs, and at least in that report the total number of net subscriber additions beat guidance on the strength of better-than-expected international gains.

A big springtime price increase last year led to the churn and to challenges landing new members, but that's not likely to happen again this year. Trends improved as the year played out, and it wouldn't be a surprise if Netflix topped its domestic subscriber guidance for the first time in a year.

2. Guidance should be strong

The past few reports have seen Netflix take a cautious stance with its subscriber guidance, and there are some pretty good reasons for pumping the brakes. Last year's price increase in the first half of the year and the launch of a couple of rival services in November weighed on its performance. Netflix will react by reeling in its forecasts when it sees it fell short last time out.

Things should be different this time. Netflix has been the source of most of the first quarter's trending video content. Folks have also been stuck at home with movie theaters closed since mid-March, so it closed out the period with what should be heavy engagement.

If you didn't quit Netflix after last year's price increase, you're not going to do so when you're leaning on streaming services more than ever. Or if you kicked Netflix to the curb, you may be signing up again to see what all the Tiger King buzz is all about. In short, the first quarter should be strong -- but even more importantly, its guidance for the new quarter should be even better.

There is some bad news

If the stage seems to be set for a return to blowout financial results and a rallying stock, you may want to see things from a contrarian's perspective. The stock has covered a lot of ground lately, and those gains may not have been fully earned. Netflix stock has soared 58% since the start of last year, even though this company has consistently fallen short of its own membership targets in its home market.

The shares are up 31% so far in 2020. All the pieces are in place for a strong report. The first quarter was probably pretty strong, especially later in the period -- and that should inspire a strong outlook come Tuesday afternoon. However, hot stocks can't have a "sell on the news" moment. This should be a very good year for Netflix investors. We probably haven't seen the last of the all-time highs in 2020, but none of that means this week will go the way that we Netflix bulls hope it will play out for one of the market's top stocks to own for the long haul.