Please ensure Javascript is enabled for purposes of website accessibility
Log In Help Join The Motley Fool
Free Article Join Over 1 Million Premium Members And Get More In-Depth Stock Guidance and Research
By Rich Smith – Apr 20, 2020 at 11:53AM

No one wants oil, and companies are struggling to find places to store it until people do want oil again.

Oil has never been cheaper.

I know you've been hearing a lot about oil being historically cheap lately, but Monday morning's plunge appears different by an order of magnitude. Before the stock market opened, the price of West Texas Intermediate crude (the U.S. benchmark) fell as low as $11.23 per barrel by 6 a.m. Texas time. As of 11:45 Eastern time, WTI was down over 43% to around $10.30 per barrel. 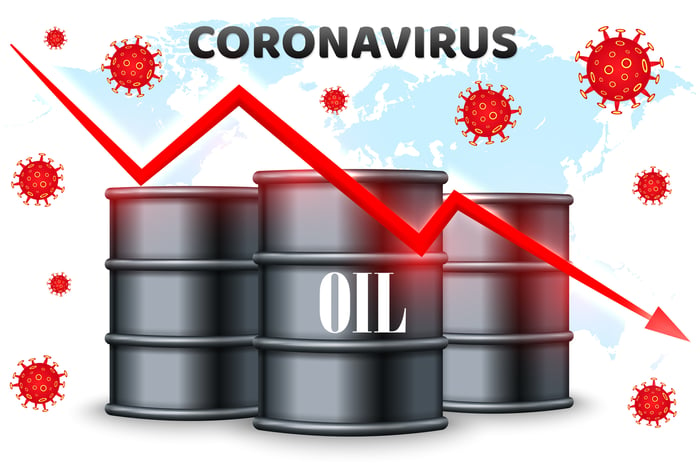 Why is all of this happening?

Coronavirus is the short answer. The longer answer is that the global COVID-19 pandemic has destroyed worldwide demand for oil. With much of the world, and much of America in particular, confined under stay-at-home orders, many people aren't driving to work anymore, which means they aren't using gas. With no one interested in, or able to travel by air, airplanes aren't burning nearly as much jet fuel, either.

The result is an oil market drowning in unwanted oil.

Experts agree that this situation won't last forever. Given that, oil companies would prefer to store their oil until they can sell it at higher prices, but this creates another problem: where to store it? Simply put, with so much oil having already been produced, but not yet consumed, we're running out of places to store excess oil. With storage prices rising and uncertain demand in the end market, buyers have to account for that in their purchase decisions and offer to pay less for each barrel of oil as a result.