Please ensure Javascript is enabled for purposes of website accessibility
Log In Help Join The Motley Fool
Free Article Join Over 1 Million Premium Members And Get More In-Depth Stock Guidance and Research
By Lou Whiteman – Updated Apr 22, 2020 at 7:30AM

Amazon is using thermal cameras to help screen for COVID-19 cases in its warehouses.

Editor's note: The Reuters report referenced in this article states that "Amazon did not disclose whose gadgets it was using." This article has been updated.

Shares of FLIR Systems (FLIR) gained more than 14% on Monday after news broke that Amazon.com is using thermal cameras at its warehouses to screen for workers who might have fevers, a tell-tale symptom of COVID-19. Screening is a huge potential market for FLIR's equipment, and Amazon's use of the cameras -- though it is unknown which cameras it is using -- is viewed as a strong endorsement of the tech, which could benefit the company.

Thermal cameras that measure the amount of heat emitted by an object relative to its surroundings are in use at Amazon warehouses in Los Angeles and Seattle, according to a Reuters report. The cameras, according to the report, are seen as superior to forehead thermometers because they require less time and less contact. 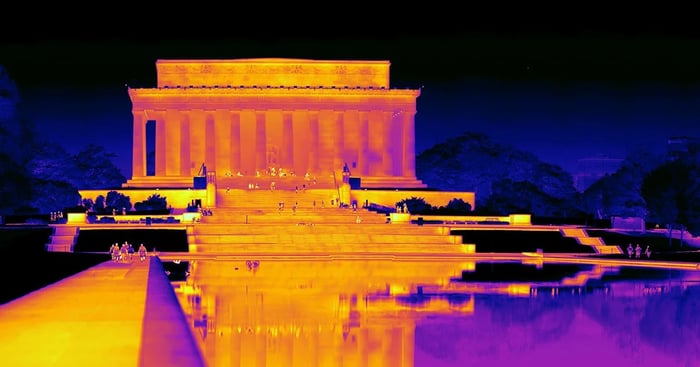 Reuters said the cameras will soon replace thermometers at worker entrances to many Amazon-owned Whole Foods stores as well.

The COVID-19 pandemic has put a fresh emphasis on workplace safety, and it seems likely that on-the-job screening for fevers and other health indicators could become commonplace in the U.S. post-pandemic. FLIR seems well positioned to capture significant additional business thanks to that trend.

FLIR's cameras right now are primarily used in airports, ports of entry, and public facilities. A move into warehouses and other private-employee workplaces could represent a huge boost to the company's addressable market, and over time generate real growth for the $1.8 billion-sales company.

That's going to take some time, and investors need to be careful not to get ahead of themselves, but given FLIR shares are down more than 25% year to date even after Monday's jump, the surge higher seems justified. FLIR could find itself with a lot of new business opportunities in a post-pandemic world.