Shares of FLIR Systems (FLIR) flew off the shelves Monday, and the thermal camera maker ended the day up more than 14%. Today, it's looking like a case of "second verse, same as the first." As of 12:20 p.m. EDT, FLIR Systems stock is up a healthy 9.6%. 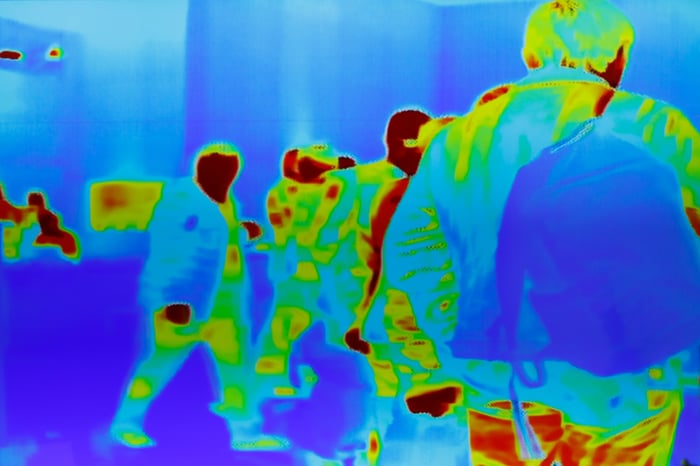 In the absence of any truly new news today, one can only surmise that investors are bidding up FLIR stock today for the same reason they bid it up yesterday.

Reuters reported that Amazon.com has begun deploying thermal cameras at its warehouses, with the intention of using them to identify employees with potential fevers, an indicator of coronavirus infection. That will allow Amazon to send sick employees home and reduce the potential spread of the coronavirus.

Now, it's not necessarily the case that the thermal cameras that Amazon is using are FLIR cameras. To the contrary, one William Blair analyst suggested that Amazon bought cameras from a different vendor.

Be that as it may, if Amazon's efforts to use thermal cameras to make its workplaces safer bear fruit, and if other companies follow Amazon's example, then there's a very good chance that these other companies will buy FLIR cameras.

As Blair noted yesterday, FLIR is "the global leader in thermal uncooled cameras." It's the logical beneficiary of increased sales industrywide if the use of thermal cameras in workplaces turns out to become a major trend in the age of the coronavirus.

One word of caution, however: After yesterday's run-up (and today's), FLIR stock currently costs more than 33.5 times trailing earnings. Even if analysts are right in predicting that FLIR will grow its earnings at about 22% annually over the next five years, that's a steep valuation to be paying as the U.S. economy heads into a recession.

Even if thermal cameras look hot right now, be careful not to pay too much -- or you may get burned.