Please ensure Javascript is enabled for purposes of website accessibility
Log In Help Join The Motley Fool
Free Article Join Over 1 Million Premium Members And Get More In-Depth Stock Guidance and Research
By Adam Levy – Apr 21, 2020 at 8:36AM

There's a new curated section on Fire TVs and Fire Tablets that bears some resemblance to The Roku Channel.

Last weekend, Amazon (AMZN -2.72%) introduced a new section on its Fire TV and Fire Tablet platforms. The feature, called #AtHome, focuses on free ad-supported content, which has seen a massive increase in interest while people practice social distancing and stay at home.

"#AtHome is a curated experience that brings together content from over 100 content partners to help you and your family be entertained, educated, and informed," the company wrote in a blog post.

The move follows along a path trailblazed by Roku's (ROKU -7.09%), which has seen a lot of success with The Roku Channel. The Roku Channel similarly curates content from both free and paid streaming services. Roku recently expanded the channel to the U.K., joining the U.S. and Canada.

An Amazon spokesperson clarifies #AtHome isn't meant to be a competitor to The Roku Channel.

That said, #AtHome could be an opportunity for Amazon to drive greater engagement for its content partners on Fire TV and Fire Tablet devices, and lay the groundwork for more favorable content deals in the future. 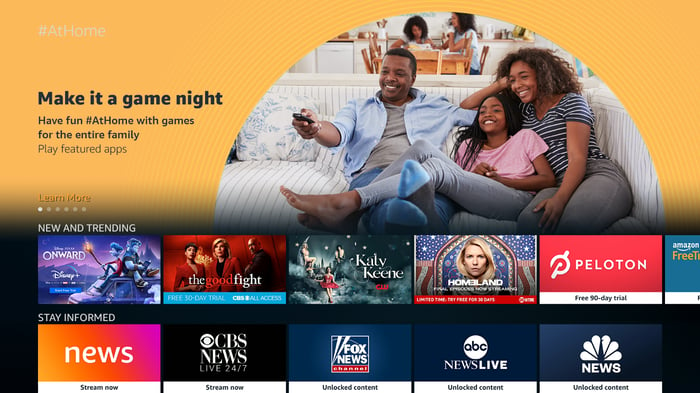 A proof of concept

The Roku Channel is a win-win for content distributors and Roku. Distributors reach a wider audience, while Roku is able to collect more revenue per hour of streaming. Both goals are accomplished by Roku's superior targeting data compared to stand-alone streaming services. Roku can use its data to highlight certain films or series it thinks its users will like, and on the other side of the coin, use the data to target advertisements.

Amazon has the potential to do the same for content companies, but potentially do one better. Amazon's user data is like Roku's on steroids. Not only does it have viewership data from Fire TV users viewing habits but it has their shopping and product-search data, and any data those users might have provided in their conversations with their Echo smart speakers.

Presently, Amazon may only be using aggregated data to determine which content owners to partner with to feature on #AtHome. But if it moves to make the feature more permanent (perhaps with a different name), its recommendations could become more granular and produce improved engagement levels with its audience.

Amazon currently offers Amazon news, which aggregates content from news partners. It's the most popular news app on Fire TV, which is notable considering it only launched six months ago. But that reach and engagement makes it very attractive to content partners.

Amazon has an opportunity to show similar improvements in reach and engagement for its #AtHome partners. Doing so may open the door for deeper partnerships like those seen in The Roku Channel. And considering the data and demand Amazon has for advertising, it could be quite lucrative.

Amazon has been ramping up its efforts to control more ad inventory on its Fire TV platform. It's been a tough negotiator, threatening to keep apps off its platform unless the app developers sacrifice more of their ads to Amazon.

The Roku Channel model gives Roku full control over all the ad inventory in exchange for a split of the revenue with its media company partners. That may be appealing to Amazon, which is always looking for new places to display advertisements. Its marketplace has gotten extremely crowded with advertisements, and it could use video ads on Fire TV as a supplement to performance marketing on its website.

Controlling more ad inventory on the Fire TV platform could ultimately improve the value of its ads on the marketplace, as Amazon can retarget ads across both platforms to improve their overall efficacy. That should increase conversion rates and, by extension, ad prices.

Considering the growing importance of advertising to Amazon's overall business, it could have a big opportunity to drive better content partnership deals and win more ad inventory with a curated channel. While #AtHome isn't that product, it could provide some interesting learnings for Amazon.

Note: This article was updated to clarify that #AtHome doesn't consider itself to be a competitor to The Roku Channel and with additional information about Amazon news.