Please ensure Javascript is enabled for purposes of website accessibility
Log In Help Join The Motley Fool
Free Article Join Over 1 Million Premium Members And Get More In-Depth Stock Guidance and Research
By Keith Speights - Updated Apr 22, 2020 at 7:39AM

These stocks have been hit hard by the coronavirus outbreak. But investors who buy now should enjoy tremendous long-term gains.

Sure, some stocks have bounced back significantly from their lows set in March. But with the S&P 500 index still down nearly 20%, there are plenty of stocks that look like bargains.

Three great stocks that you can buy on sale right now are Align Technology (ALGN -4.20%), Bank of America (BAC -2.21%), and Walt Disney (DIS -2.06%). Here's why these stocks are especially worthy of consideration by long-term investors. 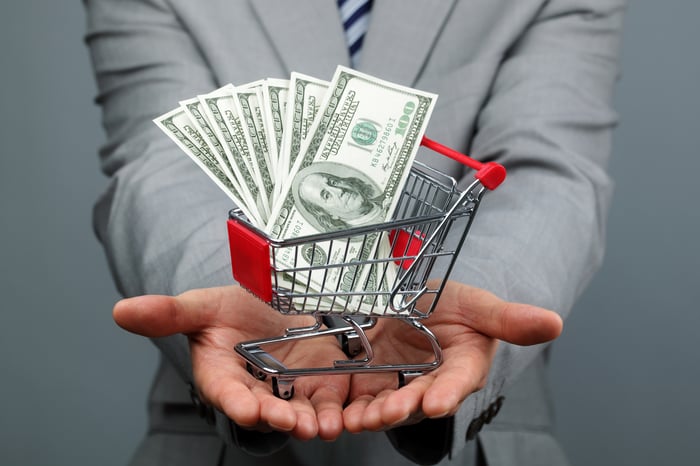 Align Technology is still down close to 35% from its highs set earlier this year after plunging as much as 52%. The orthodontic device maker gave investors a reason to worry about the impact of the novel coronavirus in late January. Align warned in its fourth-quarter update that its revenue and earnings would be lower in Q1 due to the spread of the virus in China.

Of course, that was before the crisis became a global one. Align's business has now been disrupted across the board as people delay addressing non-urgent matters like straightening their teeth. You can bet that the picture won't be a good one when the company reports its Q1 results next week.

It's important to remember, though, that the COVID-19 pandemic won't last forever. Align's revenue and earnings were growing at a fast clip prior to the coronavirus outbreak and should resume the strong momentum when life begins to return to a semblance of normalcy. People around the world are still going to want their teeth straightened. Align's Invisalign clear aligners were popular before the coronavirus crisis and will almost certainly be popular when the crisis is over.

Align remains focused on the future. The company announced in March its acquisition of exocad Global Holdings, a German company that provides computer-aided design/computer-aided manufacturing (CAD/CAM) software used by dentists. The deal closed earlier this month.

Shares of Bank of America sank 49% before rebounding somewhat. The stock is still down close to 38% below its highs, though.

Bank stocks have been hit hard because of concerns that the economic impact of the COVID-19 outbreak could lead to loan defaults and a decline in new loans. Also, super-low interest rates reduce the amount of money that banks make on the cash that they hold.

Bank of America isn't immune to these headwinds. The company missed Wall Street's Q1 estimates because it took a $4.8 billion for loan losses. It also suspended stock buybacks as a result of the coronavirus pandemic. But Bank of America is in a strong financial position to weather the storm, with $699 billion in global liquidity sources and a solid tier 1 capital ratio (a measure of how well a bank can absorb losses) of 10.8%, well above the minimum level required.

Over the long term, Bank of America should prosper as the global economy gets back on its feet. The factors driving the company's tremendous success last year, notably including its improved efficiency from reducing costs and its strong wealth management business, will contribute to Bank of America's success in the future as well.

Walt Disney stock has fallen more than 30% this year. It was even worse in March, with shares tanking as much as 42% at one point.

It's easy to see why the COVID-19 outbreak has taken a huge toll on Disney. The company has shut down its theme parks and cruise line for an indefinite period. It's been forced to delay the debuts of several movies. Disney's profitable ESPN sports TV network hasn't had any new sporting events to broadcast.

One of the few bright spots for Disney during this crisis is its Disney+ streaming service. The company reported earlier this month that the new streaming service now has more than 50 million subscribers. While the business doesn't generate nearly enough revenue to offset all Disney's other woes, the strength of Disney+ bodes well for the company's future.

That future will include the eventual reopening of Disney's theme parks, splashy launches of new blockbuster movies, and plenty of football games and other events on ESPN. People who have been isolated for lengthy periods will almost certainly want to be entertained as they have been in the past. And Disney's magic will return.

I'm convinced that all three of these stocks will look like tremendous bargains in hindsight at some point down the road. What I'm not sure of, though, is exactly how far down the road it will be.

It's possible that there will be a lingering effect from the COVID-19 outbreak on companies including Align Technology and Disney until a vaccine is available. The economic impact from the pandemic could weigh on many companies, including Bank of America, well into next year and perhaps even longer.

However, my view is that each of these stocks will bounce back and become huge winners for patient investors. It's a question of when and not if it will happen.