Please ensure Javascript is enabled for purposes of website accessibility
Log In Help Join The Motley Fool
Free Article Join Over 1 Million Premium Members And Get More In-Depth Stock Guidance and Research
By Rick Munarriz - Apr 22, 2020 at 10:00AM

A record 15.77 million net additions worldwide is a welcome but not entirely unexpected surprise.

Netflix (NFLX 0.72%) did almost everything possible in delivering a blowout quarter on Tuesday afternoon. It closed out the quarter with 15.77 million more streaming subscribers worldwide than it had three months earlier, more than double the 7 million it forecast for the period back in January.

The report wasn't perfect. Revenue topped its earlier target, but Netflix fell short of the operating profit and net income that it was aiming for. However, with momentum clearly in Netflix's corner, it was a monster performance. Wall Street's initial reaction hasn't matched the bar-raising magnetism of the world's leading premium streaming platform. The shares barely inched higher in Tuesday's after-hours trading. 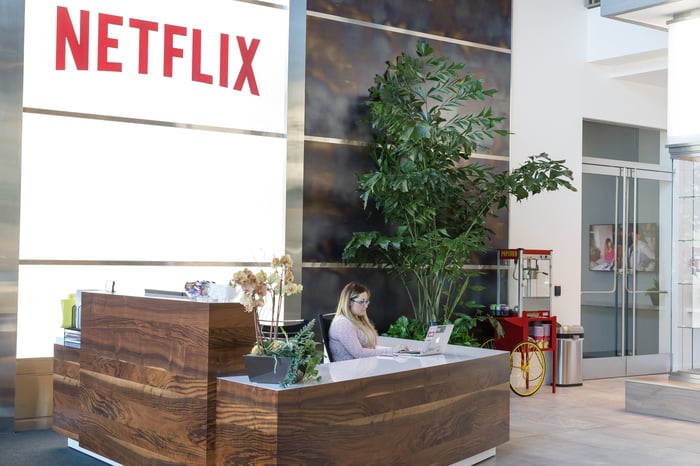 Netflix tends to have a good read for what viewers crave, and that was obvious with some of the audience tallies revealed in Tuesday's earnings report. Tiger King was taken in by 64 million Netflix households, and 30 million members checked out Love Is Blind. In a sign that Netflix has become a truly global enterprise, it projects that the new season of Spain's Money Heist will attract 65 million members, more than Tiger King's current haul. Even the campy Spenser Confidential movie, starring Mark Wahlberg, was watched by 85 million members.

Netflix's latest entry into the pop culture lexicon is Too Hot to Handle, a reality show where a collection of hard-bodied singles stand to split as much as $100,000 in prize money if they can avoid sexual contact with anyone else on the show. It may seem like a silly premise, but it's been the most-watched show on Netflix for U.S. audiences since shortly after Friday's debut.

If you're trying to assess why Netflix stock isn't taking off after a smoking hot quarter, maybe it is the one that is too hot to handle. As bad as this year has played out for a lot of investors, Netflix stock closed on Tuesday trading 34% higher so far in 2020. Investors have flocked to it as one of the handful of growth stocks built to thrive through the COVID-19 pandemic, so one can argue that the blowout financial performance was baked into the shares.

Netflix shares hitting another all-time high late last week assumed a monster report. The market darling is stoking its own fire by pointing out that the lion's share of the global user surge happened in the final month of the quarter as the world hunkered down, but that's not a surprise. Netflix coming through with its strongest domestic net additions in more than six years is not breaking news. If you're a Netflix subscriber, you're not cutting it loose when you're spending a lot more time at home. If you unsubscribed in the past, there is no better time to rekindle that relationship than right now when entertainment options are scarce and every couple of weeks your friends are talking about a new piece of Netflix content.

Don't let the lack of a huge initial pop in the stock following its breakout performance turn you off. Netflix is a lot like Too Hot to Handle right now. If you get too amorous, you may find some money taken away from the pot. However, history will look kindly at this week in Netflix history. It proved once again that it's the streaming service that everyone is chasing. It remains a top stock for investors, and everything is falling into place for it to eventually move higher heading into its next financial update three months from now.