Toyota expects exports to the U.S. to fall sharply in May and June.

Toyota Motor (TM -2.59%) will cut its auto production in Japan by about half from its most recent plan next month, a move that will affect 18 of the company's factories and dozens of suppliers, according to a Nikkei report on Wednesday.

Nikkei reports that the Japanese auto giant will also cut its Japan production in June due to growing pessimism about the prospects for recovery in the North American auto market. About a quarter of the vehicles that Toyota manufactures in Japan are exported to North America. 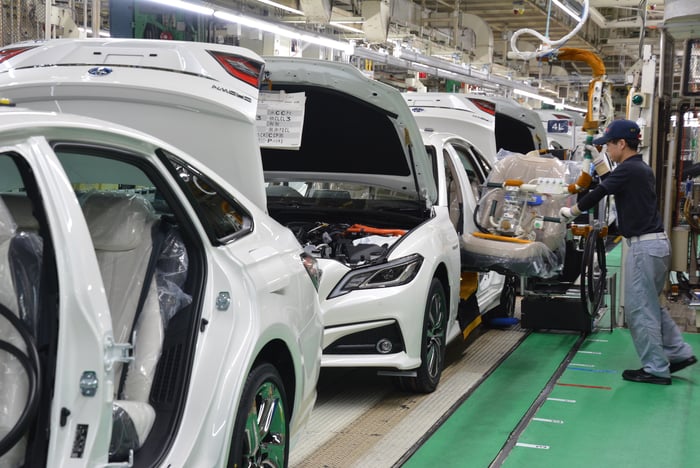 Toyota's U.S. sales fell 37% in March as social-distancing measures took hold in most parts of the country. The company's North American factories closed in mid-March and will remain closed at least until May 1.

Toyota produced 3.41 million vehicles at its 18 Japanese factories last year, and had planned to produce about 3.24 million this year before the outbreak of the COVID-19 virus. About 62% of the vehicles that Toyota builds in Japan are exported. The remainder are for domestic consumption.

Toyota has already cut some production in Japan. It shut down production lines at five of its factories for several days in the first half of April, hoping to bring supplies of its vehicles in line with slumping overseas demand.

The moves to reduce production in May and June will put Toyota at risk of falling below an annual production rate of 3 million vehicles per year, a so-called "red line" below which it would have to consider cutting jobs. The reductions will also put additional pressure on Toyota's suppliers, many of which operate with relatively thin margins.

Toyota will report earnings for the quarter and fiscal year that ended on March 31 in early May.