Please ensure Javascript is enabled for purposes of website accessibility
Log In Help Join The Motley Fool
Free Article Join Over 1 Million Premium Members And Get More In-Depth Stock Guidance and Research
By Harsh Chauhan – Apr 23, 2020 at 9:15AM

The entry-level device could have been a big win for Apple in this price-sensitive market.

Apple's (AAPL 1.47%) all-new iPhone SE isn't the greatest device to have come off the company's assembly lines, but it was never meant to be one. The company has resurrected a tried-and-tested formula that worked well last time.

An entry-level iPhone priced at $399 had proven its mettle four years ago. This time, it was supposed to help Apple tap into the fast-growing mid-range smartphone space in price-sensitive markets such as India.

The good news is that Apple seems to have gotten the recipe for the latest iPhone SE right. The device packs Apple's latest A13 Bionic processor into the chassis of the iPhone 8, just as the rumor mill had anticipated. The price is also enticing -- the base model starts at $399 (just like the 2016 iPhone SE). This puts the iPhone SE in a sweet spot to take advantage of the booming mid-range smartphone market in India.

However, the sad part is that the device might fail to land customers in India, as it's been priced at a premium. 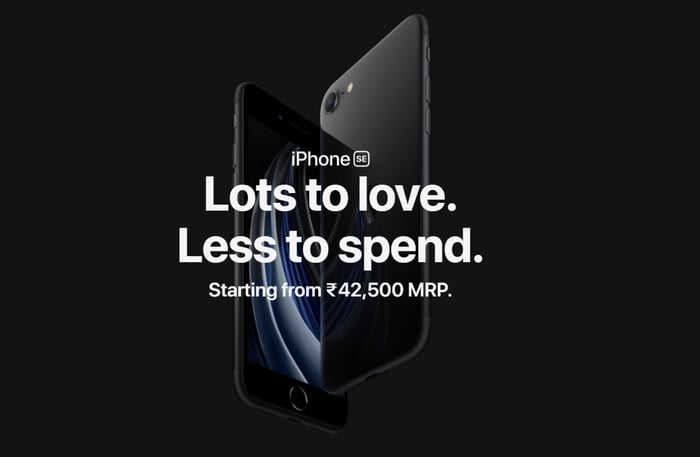 According to Apple's India website, the base model of the iPhone SE starts at 42,500 Indian rupees (roughly $555 at the current exchange rate). The India pricing is about 39% more expensive than in the U.S. This could effectively kill the interest of Indian consumers in the device, as the iPhone SE is dangerously close to other premium smartphones in terms of pricing for that market.

For instance, the OnePlus 7T, priced at less than 35,000 rupees (roughly $457) looks like a much better deal. The OnePlus device rocks a triple rear-camera setup, a 6.55-inch AMOLED (active-matrix organic light-emitting diode) display, and a larger storage capacity of 128 GB, compared to the 64 GB storage of the iPhone SE's base model.

Other devices such as Samsung's Galaxy S10 Lite, and offerings from Chinese OEMs (original equipment manufacturers), also undercut the iPhone SE in terms of pricing, while offering superior specs. In short, the Apple iPhone SE doesn't give Indian consumers a value-for-money proposition, thanks to the premium the company is charging in India.

There are a couple of reasons why Apple has been unable to price the iPhone SE at $399 (roughly 30,500 rupees) in India. First, the Indian rupee has depreciated strongly this year in comparison to the U.S. dollar -- making imports expensive. Second, the Indian government levies a basic import duty of 20% on iPhones. Last month, the government added a 10% service tax on top of the existing import duty, a move that made iPhones even more expensive in India.

So Apple probably had no choice but to price the new iPhone SE at a point where it risks becoming irrelevant in India, given the competition. 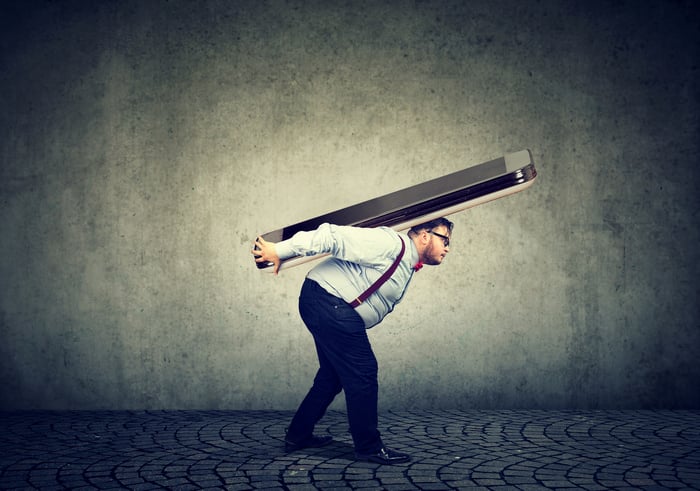 The iPhone SE price needs a haircut in India

The mid-range smartphone segment in India grew at a terrific pace last year. IDC reports that sales of devices priced between $200 and $500 shot up 55.2% in 2019, accounting for 19.3% of total smartphone sales in India.

The iPhone SE could have been the right product for Apple to tap into this segment, had it carried its international pricing into the Indian market. That may not be the case unless and until Apple finds a way to reduce the price and make the iPhone SE affordable in the Indian context.

Historic evidence suggests that Apple could give the new iPhone SE's price a haircut. After all, the company had done well to keep iPhone 11 pricing at par with rivals last year, and it has a history of offering heavy discounts in India to boost sales.

So, all may not be lost for the iPhone SE in India just yet. But Apple will have to move quickly and think of lowering prices so the device stands a chance against more powerful but less costly rivals. Otherwise, the tech giant's ambition of establishing itself as a key smartphone player in India will have to wait longer.

The country is reeling under the economic impact of the COVID-19 pandemic, and millions of jobs are on the line, so buying a mid-range iPhone at the price of a flagship device would probably be the last thing on Indian consumers' minds. In that market, Apple will have to consider reducing the exorbitant price of its latest device.