Please ensure Javascript is enabled for purposes of website accessibility
Log In Help Join The Motley Fool
Free Article Join Over 1 Million Premium Members And Get More In-Depth Stock Guidance and Research
By James Brumley – Apr 23, 2020 at 9:30AM

A little digging into last year's comparable quarter, and a deeper dive into the company's divisions, is eye-opening.

It would be easy to be confused by Monday's first-quarter report from International Business Machines (IBM -2.79%). Per-share earnings were up, sales were down, and somehow, profit margins actually improved at a time when they seemingly shouldn't have. The explanation? Some of the most touted numbers in the report didn't come with a much-needed footnote that would have made things much simpler to understand.

That's simultaneously good news and bad news for shareholders. Revenue didn't shrink solely because IBM couldn't find buyers for its products. Conversely, earnings weren't nearly as strong as they seemed, given the media's most-touted comparisons, because most of the media ignored the more relevant per-share profit benchmark.

The sales overview: IBM generated $17.57 billion worth of revenue during the three-month stretch ending in March, down from $18.18 billion in sales for the same quarter a year earlier. The figure was also shy of the top-line number between $17.6 billion and $17.7 billion analysts were modeling. 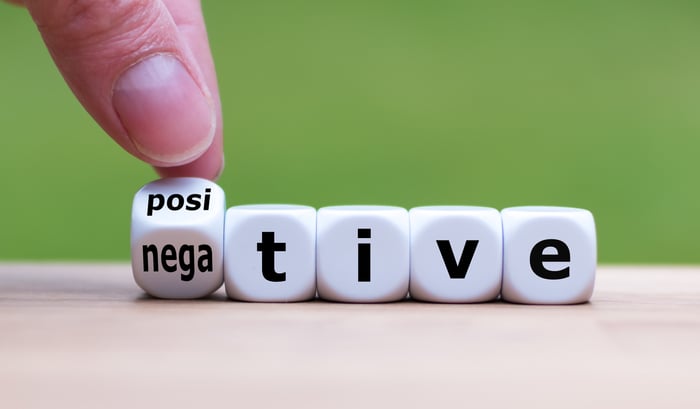 Don't take the weakness completely to heart, however. At least some of the decline was by design, and another piece of it was expected.

IBM operates five different business technology units: cloud & cognitive software (including Red Hat operations); global business services (including app management and consulting); the aforementioned global technology services; systems (mainframes and storage); and global financing. Of those five, only two saw lower sales during IBM's first fiscal quarter of 2020. Of those two, one revenue dip is by design -- IBM is winding down its original equipment manufacturing financing business. The other was no surprise. That's the global technology services unit, which was losing ground even before the coronavirus contagion took hold. Its setback last quarter was hardly a surprise. The graphic tells the tale. 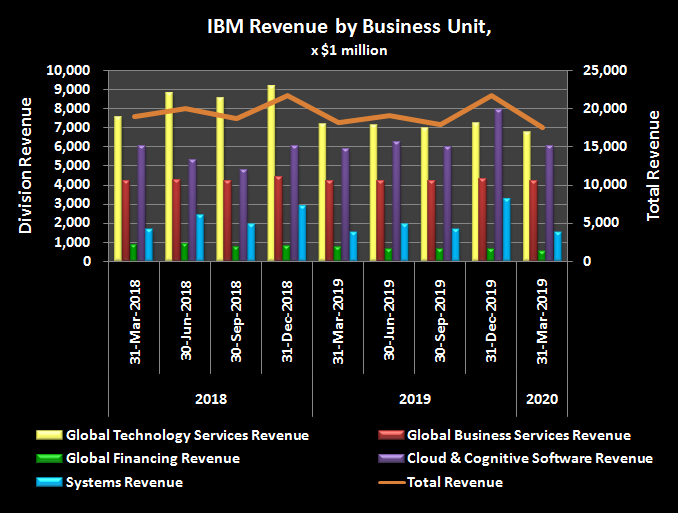 That's the good news. The bad news is that earnings were even worse than suggested.

IBM reported earnings of $1.31 per share during the quarter ending in March, well short of the $1.78 per share profit posted for its first quarter of 2019. Analyst estimates pegged last quarter's bottom line at somewhere between $1.80 to $1.81, depending on the source.

IBM's operational per-share profits, however, were actually much higher than the GAAP-based figure. After factoring in unusual costs like retirement expenses, acquisition costs, and changes to the tax code, IBM earned $1.84 per share, topping analysts' outlooks and improving profitability when only considering ongoing operations and excluding one-time expenses.

While IBM's first-quarter per-share earnings figure has been mostly compared to the year-ago EPS of $1.78, that's not the most relevant comparison. An actual look back at its Q1-2019 report plainly says the company's operating EPS -- the much more meaningful indicator of its actual fiscal health -- was $2.25 per share.

Earnings DID shrink last quarter, by considerably more than sales did.

And it's not difficult to track down why. The expense lines of IBM's income statement -- like selling and administrative costs, research spending, and interest payments -- soared from $6.16 billion during the first quarter of 2019 to nearly $8.0 billion for the quarter ending in March. Selling and administrative costs alone grew from $4.7 billion to almost $6.0 billion, and though they only cost the company $326 million last quarter, interest expenses jumped by 55% last quarter, while research and development costs grew 13% to more than $1.6 billion.

In this same vein, although most of its five divisions managed to generate all the revenue they could have reasonably been expected to last quarter, all five reported lower year-over-year operating income last quarter. Two of the five lost money. 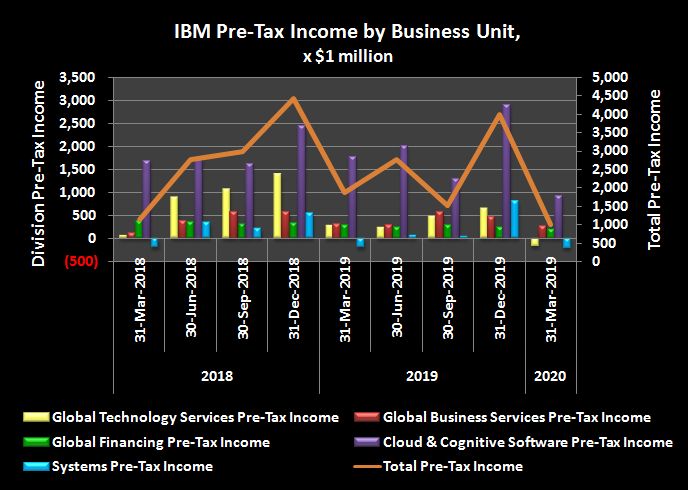 Simply put, IBM doesn't have a huge sales problem, but it's certainly got a profit problem.

It remains to be seen just how much of last quarter's administrative and R&D spending will persist into the rest of the year. But with two units in the red last quarter -- a quarter that wasn't wholly impacted by COVID-19 -- and all five reporting sizable decreases in profitability, this isn't the time to ramp up spending. IBM even withdrew its profit guidance for the year, conceding the coronavirus pandemic made it nearly impossible to gauge what the future holds.

Curiously, profitability and margins weren't hot topics during the earnings call. It may well be one thing investors want to keep in mind for the foreseeable future, though, as IBM was starting to hint it might finally be able to turn that tide as well. Now that reversal is in question. 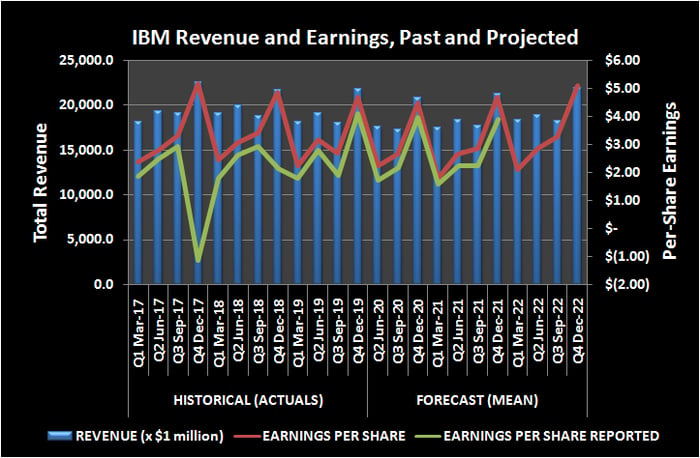