Please ensure Javascript is enabled for purposes of website accessibility
Log In Help Join The Motley Fool
Free Article Join Over 1 Million Premium Members And Get More In-Depth Stock Guidance and Research
By Nicholas Rossolillo – Apr 23, 2020 at 9:41AM

A world of connectivity means this long-term winner has more left in the tank.

The smartphone boom during the late 2000s and 2010s meant money in the bank for many semiconductor companies. Lots of new users, frequent phone upgrades, and rising prices as each year packed more tech into the mobile devices meant big increases in sales and profitability. Primarily riding the coattails of Apple's (AAPL -0.11%) iPhone, Skyworks Solutions (SWKS) stock is sporting a 485% return over the last trailing 10 years, compared with just 136% for the S&P 500.

However, the lion's share of those returns on Skyworks had been made by 2015, and the stock has been trading in volatile sideways action ever since. The first problem to crop up was the gentle decline in global smartphone shipments the last few years as consumers have begun to hold onto phones for longer (global units shipped were 1.37 billion in 2019 compared with the peak of 1.47 billion in 2016, according to Statista). With the initial growth phase now over, supplying components for phones is now a cyclical affair just like any other manufacturing business. A disruptive trade war between the U.S. and China that eliminated another key Skyworks customer, Huawei, from the mix also hasn't helped, not to mention the current coronavirus crisis.

And yet there is still great potential for Skyworks. With a market cap of $15.7 billion, this isn't a tiny company that is going to shoot an investment portfolio into seven figures all on its own. But it is far smaller than mega-chipmaker Qualcomm (QCOM) -- $84.7 billion market cap as of this writing -- known the world over for providing the processors that actually operate mobile devices (versus Skyworks' radio frequency chips that enable a network connection). With the Internet of Things (IoT) movement still ongoing and 5G mobile networks still in the very early innings of rollout, this small-ish chipmaker is worth investigating. 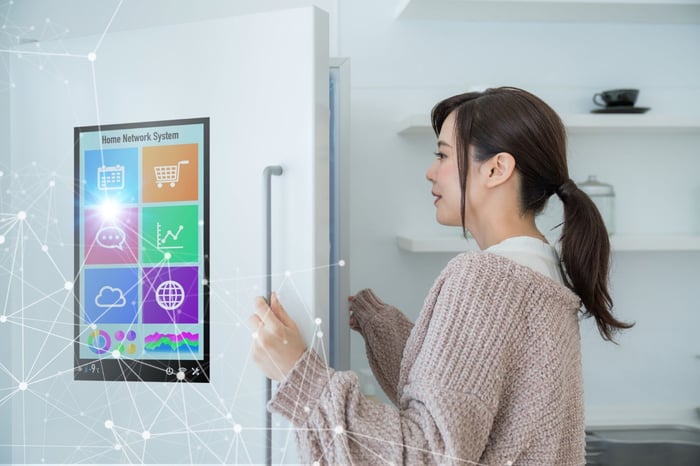 Replacing mobile phones with mobile everything

First, it's worth acknowledging that Apple's iPhone suite remains a large part of Skyworks' business. Rough estimates put the figure at upwards of 50% of Skyworks revenue last year. With such a heavy reliance on phone sales but phone shipments flatlining at best (up to this point, Apple had made up the difference by raising average prices on the iPhone), it's commendable that Skyworks has been able to increase its own sales at all. Over the last five years, revenue is up 6% -- which includes the elimination of Huawei, which was 10%-plus of sales before the trade war in 2019 axed it from the equation.

Skyworks has accomplished the feat by adding new connectivity chips to the portfolio. What started with the smartphone has grown into connectivity for other consumer electronics, smart city devices (network-controlled lighting and internet hotspots, for example), autos, medical devices, and manufacturing equipment -- collectively known as the IoT. The slow rollout of 5G mobile networks is expected to only add impetus to the growing list of connected devices.

And on that front, Skyworks also plays an important role. Before coronavirus threw the global economy into a tailspin, the company's 5G network infrastructure hardware was helping it rebound from the trade war. A return to growth will have to wait, as management revealed its preliminary second-quarter fiscal 2020 (three months ended March 27, 2020) revenue was $766 million, down 5% year over year. With demand for the rest of 2020 a big question mark until global restrictions to arrest the spread of COVID-19 are eased, investors should assume declines are in store.

Nevertheless, the long-term trend underpinning Skyworks' investment thesis is still in place. Some estimates put the number of connected "things" worldwide to surpass 40 billion by 2023, well over double the current count. And with internet traffic becoming increasingly crowded and dominated by data-intensive tasks like video streaming, video calls, and artificial intelligence, 5G isn't just a luxury for those consumers who want faster download speeds.

Deep pockets will pay off

Though Qualcomm should also benefit from the IoT and 5G, Skyworks is my personal favorite. Besides just being smaller, the company has zero debt and $1.23 billion in cash and equivalents on its books at the end of 2019. And in spite of recent troubles, adjusted net income profit margins sat at 32% during the final quarter of calendar 2019.

For investors, that equates to a company with ample wiggle room to navigate the current crisis as well as the pockets to continue investing in innovation. Shares presently trade for 19.7 times trailing 12-month free cash flow (what's left after cash operating and capital expenses are paid for) -- not exactly cheap given the uncertain future that lies immediately ahead. But for those looking out over the next decade and how mobility will continue to rapidly change the world we live in, Skyworks is a top-notch semiconductor growth stock.