The EU is investigating Boeing's Embraer deal. That's either good or bad news.

Shares of aerospace giant Boeing (BA -0.94%) popped 5.5% in early trading Thursday. As the afternoon wears on, Boeing shares are giving up some of those gains, trading closer to a 2.6% gain as of 2:15 p.m. EDT. But why is Boeing stock moving at all?

For the answer to that question, we turn to Europe. 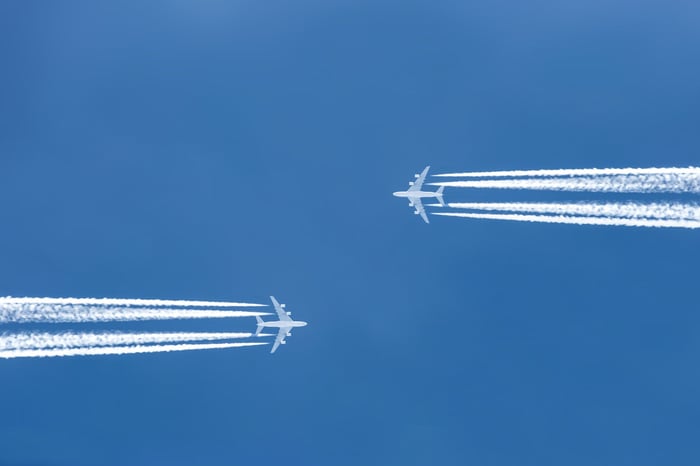 For more than two years now, Boeing has pursued a deal to acquire an 80% interest in rival Embraer's (ERJ -1.03%) commercial aviation business. Such a tie-up, however, raises antimonopoly concerns globally. Although Brazil's antimonopoly agency has signed off on the deal, European Union antimonopoly regulators are looking into whether merging the world's third-biggest plane maker into Boeing would give Boeing too much market power and eliminate too much competition in the airplane manufacturing industry.

The EU suspended its investigation of the deal back in February while awaiting submission of documents from Boeing and Embraer. But now that those documents have been provided, the clock is running again. The EU is expected to issue its decision by Aug. 7, according to Reuters.

Will the EU ultimately decide to permit or reject the merger? And which of those outcomes would be most bullish for Boeing?

The answer depends on how you look at the deal Boeing and Embraer struck. On the one hand, if the deal is approved, Boeing gets to eliminate a rival in commercial aviation, add a large amount of small-jet capacity to its business of building (mostly) large jet airplanes, and become the undisputed No. 1 maker of airplanes globally.

On the other hand, the price of this transaction -- $3.8 billion -- is vastly more than 80% of what Embraer stock is currently worth (which is closer to $1.6 billion), which suggests Boeing could be overpaying for what it's trying to buy. That's a good reason for Boeing investors to want the EU to forbid the merger and let Boeing off the hook.

Right now, with Boeing stock up on the EU news, it's this latter way of looking at things that investors appear to prefer. They want this deal to die, and they're hoping that on Aug. 7, the EU will kill it.