The stock market finished the week on a winning note.

Stocks were generally higher on Friday, as market participants seemed willing to accept all the uncertainty about the coronavirus pandemic on hopes that efforts to keep the economy afloat will be successful. Major market benchmarks flirted with losses early in the day, but a broad-based advance took hold by the afternoon. At the end of the day, the Dow Jones Industrial Average (DJINDICES: ^DJI), S&P 500 (SNPINDEX: ^GSPC), and Nasdaq Composite (NASDAQINDEX: ^IXIC) were all higher by 1% to 2%.

There were some big individual stock winners on the day. Facebook (META 2.16%) got a nice boost as it decided to take on rivals in a hot area of technology. Meanwhile, Wayfair (W 4.79%) faced the unusual situation of having an analyst company make two calls on the stock in one day, but shareholders didn't seem disappointed.

Shares of Facebook rose 3% Friday following its decision to add a feature to its social media platform. The new functionality will allow users to take advantage of video chat capabilities, in the hopes of grabbing some market share from competitors.

Zoom Video Communications (ZM 0.48%) has been one of the biggest success stories of 2020, as the video conferencing specialist has seen its core audience jump to 300 million users. Zoom and Microsoft (MSFT 3.37%) have been the primary rivals in the collaboration space on the enterprise side.

Facebook doesn't exactly have an enterprise focus, but it's hoping to co-opt some of the more casual use that Zoom has seen more recently. Messenger Rooms will allow up to 50 people join without a charge, and it looks quite a bit like the Zoom interface.

Based on the stock's reaction, investors like that Facebook is defending its turf by coming out with a competing video chat platform. Whether it'll eat into Zoom's business or not remains to be seen, but adding new features has been part of Facebook's long-term success for years. 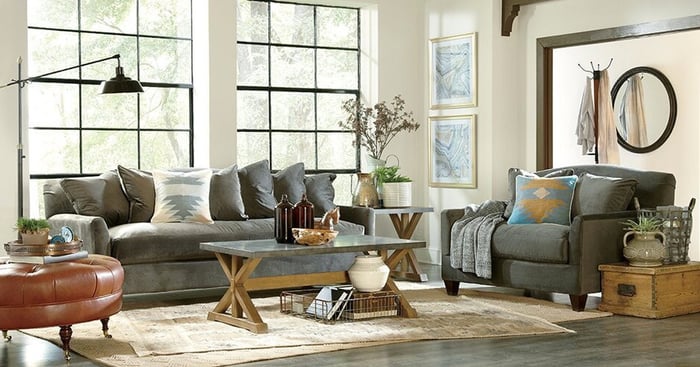 Wayfair gets praised, then downgraded

Elsewhere, online furniture specialist Wayfair saw its stock soar 17%. Wayfair got positive comments from a stock analysis company early Friday, but then that same company changed its rating a second time later in the day.

Early on, Wayfair got positive comments from analysts at Stifel, including lifting the price target on the stock by $40 to $115 per share. Wayfair repeated its buy rating, noting that the impact of the coronavirus pandemic would force furniture shoppers online and potentially boost the e-commerce specialist's business.

Yet after the stock's jump, Stifel came back and cut its rating on the stock from buy to hold. That might seem like a quick response, but given that the stock's $18 upward move took the price above $122 per share -- well above the $115 per share price target -- the downgrade based on valuation seemed justified.

It's not every day that you see one analyst give two different views on a stock. Yet the calls were consistent with the way the stock behaved, and it shows that at least in some people's eyes, valuations still matter.