Please ensure Javascript is enabled for purposes of website accessibility
Log In Help Join The Motley Fool
Free Article Join Over 1 Million Premium Members And Get More In-Depth Stock Guidance and Research
By David Jagielski - Apr 25, 2020 at 8:30AM

It's rare to find a cannabis company that can stay out of the red. These three have, but are they good buys today?

Cannabis investors haven't always been too concerned by profitability, or lack thereof, in the industry. But with COVID-19 slowing down global economies and putting many companies in danger of going under, having strong financials is more important than ever before. A key part of the equation is being able to stay in the black.

While it's not the only factor investors should consider, profitability is important because it can help a company become self-sufficient and minimize the need to raise cash through the equity markets, thus diluting outstanding shares. It's not a common feat in the industry, so below are three pot stocks that have posted profitable quarters within the past year.

Cronos Group (CRON -5.26%) is a vertically integrated cannabis company headquartered in Toronto, Ontario. The company released its annual results on March 30 and showed an incredible net income of $1.2 billion for the full year of 2019. It's a significant improvement from the $21.8 million loss Cronos reported in the prior year.

But the growth looks different when you consider that the company only generated $25.6 million in revenue for the whole year. Cronos didn't even have a positive gross profit as the company wrote down inventory by $29.4 million, easily putting its financials in the red. And while it recorded an operating loss of $121.5 million, Cronos did swing back into the positive, thanks to a $1.3 billion revaluation of derivative liabilities tied to cigarette maker Altria Group's (MO -3.31%) investment in the cannabis company.

Cronos has consistently posted an operating loss in each of the past 10 quarters, and the losses have been deepening in recent periods. With underwhelming sales numbers and rising expenses, there's little reason to expect Cronos can stay in the black this year, at least not without the help of non-operating items giving it an artificial boost. 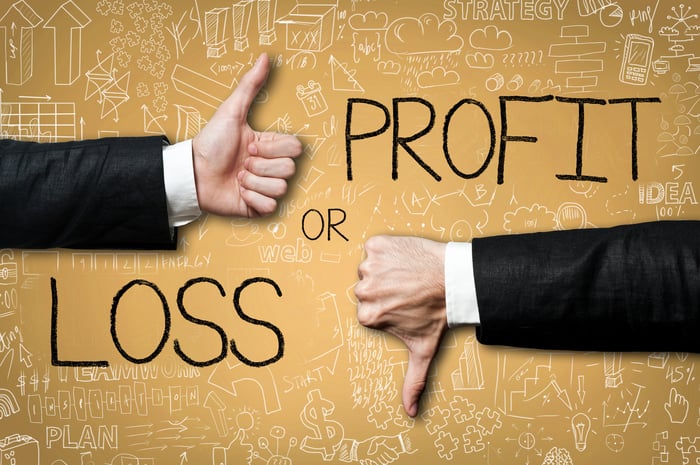 Charlotte's Web (CWBHF -12.27%) is based in Colorado and it's another vertically integrated cannabis company. It sells a variety of hemp-derived cannabidiol (CBD) products in more than 40 states. It had been posting consistent profits until the last two quarters when its financials turned red.

Its profit margins were regularly above 8% but in the past two periods it has accumulated net losses totaling $20 million. Charlotte's Web has struggled to generate much growth in recent quarters, and that's problematic as its expenses rise. The company's been spending more on expanding its business, leading to an increase in headcount and overhead expenses. In the fourth quarter, the company's operating expenses totaled $26.4 million, more than double the $13 million that Charlotte's Web reported in the prior-year period. In the company's most recent quarter, Charlotte's Web wrote down inventory, and like Cronos, it also had a negative gross margin.

Unfortunately, unless the company can aggressively shed costs, its recent string of losses may continue for the foreseeable future. With hemp prices headed down as a result of soft demand, it's going to be even more challenging for the company's sales to rise, making profits even more elusive. Further, a weaker economy due to the coronavirus pandemic could put even more downward pressure on demand.

But the one positive is that the company's e-commerce sales continue to look strong. In 2019, its direct-to-consumer (DTC) sales rose by 39%. They accounted for 57% of the company's total revenue this past year, which is in line with the 56% that DTC sales made up in 2018. While it's possible Charlotte's Web could swing back to profit if it can drastically cut costs, it's not something investors should expect to see this year.

Trulieve Cannabis (TCNNF -4.38%) is a vertically integrated medical marijuana company with 46 of its 48 dispensaries in Florida. The company's reported a profit in every quarter since it's been generating sales. It released its audited annual financial statements on April 8, in which the company posted an after-tax profit of $178 million on sales of $252.8 million for the full year. However, like Cronos, Trulieve got some help along the way. Fair value adjustments added back about $200 million to the company's operating income.

However, with pre-tax income of $272.5 million, Trulieve would have remained in the black even without the fair-value adjustments it recorded throughout the year. And that's why unlike Charlotte's Web and Cronos, Trulieve is the most likely pot stock on this list to continue posting profits this year.

While the COVID-19 pandemic could put a dent in the company's operations this year, demand for medical marijuana should remain relatively stable, as it's more of a necessity than recreational pot. In 2019, Trulieve's sales skyrocketed by 146% from the previous year.

Here's a quick look at how all three stocks have performed over the past year. Only Charlotte's Web has done worse than the Horizons Marijuana Life Sciences ETF, which is down 69% during this period. Although Trulieve has suffered losses, they've been nowhere near as bad as those of its peers. And from a profitability standpoint, that stock looks to be the safest of the three listed here.

For investors looking for a fairly safe pot stock to buy today, Trulieve provides the best mix of stability and potential growth.