Please ensure Javascript is enabled for purposes of website accessibility
Log In Help Join The Motley Fool
Free Article Join Over 1 Million Premium Members And Get More In-Depth Stock Guidance and Research
By Robert Izquierdo - Apr 25, 2020 at 10:12AM

The company is in its high-growth phase -- will this lead to big rewards?

Pinterest (PINS -2.17%) is only a year old as a public company. It describes itself as a visual discovery engine, though I would call it more of an online pinboard incorporating social media elements. Regardless, it can serve as a useful tool for generating ideas for projects like home decorating, cooking, vacation planning, and more.

The platform is relatively young, so it's still growing rapidly, but is that growth sustainable enough to fuel the fortunes of its investors? Let's break down the business and find out. 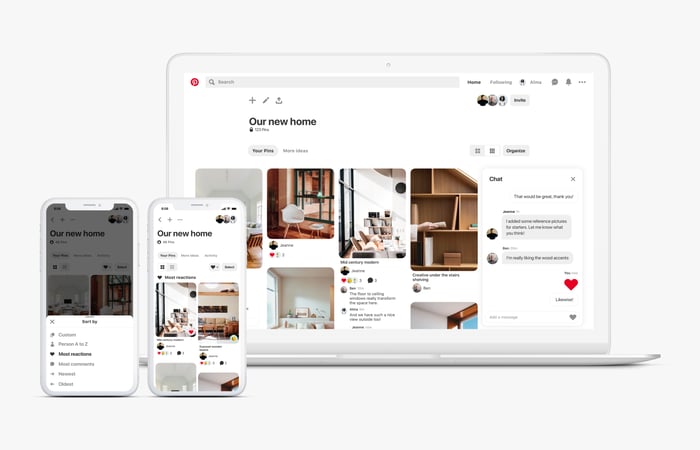 The track record so far

In its fourth quarter annoucement, the company reported 335 million monthly active users (MAUs), up 26% year over year. Moreover, in a preview of first-quarter results, the company expects MAUs to fall in the range of 365 million to 367 million, good for another quarter of 26% growth at the midpoint.

Pinterest has done well monetizing this user base, generating over $1 billion in revenue for the first time in 2019 as its top line grew 51% year over year. Though the COVID-19 pandemic is pressuring most companies, the company's growth continues in 2020 with management expecting $269 million to $272 million of revenue in the first quarter, up 34% at the midpoint.

Even with these impressive growth metrics, this technology stock still trades near its IPO price of $19 per share as of this writing. Looking ahead, the company has withdrawn its full-year 2020 financial guidance, citing uncertainty around the pandemic.

This move makes sense given Pinterest relies on advertising spend, which tends to shrink when companies face major sales declines as is the case right now. CFO Todd Morgenfeld noted in a press release from earlier this month:

The near-term financial impact of this pandemic is rapidly evolving and difficult to measure and quantify. First-quarter revenue performance was consistent with our expectations through the middle of March, when we began to see a sharp deceleration. Fortunately, despite weakness across nearly the entire advertising market, our exposure to some of the most affected segments like travel, automotive, and restaurants has not been significant.

Challenges for the company

Once the pandemic passes, Pinterest will have other challenges to overcome. The company measures its ability to monetize its user base with the average revenue per user (ARPU) metric. During the fourth quarter, ARPU was $1.22, up 15% from the prior-year period's $1.06. When broken down by geography, the U.S. ARPU was $4.00, while the rest of the world delivered just $0.21, although that figure more than doubled year over year from just $0.09.

Clearly, the company's home market is crucial as a single U.S. user is worth 19 times more than an international one. However, U.S. MAUs increased just 8% to 88 million during the quarter. Meanwhile, international MAU growth was much stronger at 35%. Take a look a the company's MAU growth over the last year.

User growth in its more lucrative U.S. market is clearly muted compared with its international segment. That's why one of the company's 2020 priorities is to improve its suite of advertising tools for international advertisers with the goal of attracting larger companies, which can help grow international ARPU.

If Pinterest can succeed in raising ARPU for its international division, that would translate into big gains for its top line. Combine this with the company's strong financial position of $1.7 billion in cash, equivalents, and marketable securities and no debt as of March 31 -- plus an additional $500 million available from its revolving credit facility -- and a case can be made for Pinterest's ability to weather this storm while continuing to pursue its long-term strategic goals.

The company is still in its growth phase, but as far as major social media platforms go, Pinterest provides a niche service. The company is working to expand its set of use cases to make it more appealing to a larger number of users. But the nature of its service means there are limits to how far it can grow without expanding beyond its online pinboard roots. Pinterest may be a worthwhile company worthy of consideration, but it currently falls short of being a millionaire maker.