There's reason to believe it doesn't think the pandemic is a one-off event for its business.

Although the coronavirus crisis has bludgeoned numerous industries -- cutting off their lifeline to consumers through mandatory lockdowns and shelter-in-place orders -- some businesses are thriving. Netflix just reported a massive gain of 16 million new subscribers, because what else are you going to do when forced to stay home but watch movies?

Blue Apron (APRN -0.81%) is a business similarly positioned to report big subscriber gains when it reports earnings on April 29, due to the COVID-19 pandemic. Restaurants are closed or offering limited delivery opportunities, and supermarkets are limiting how many customers they allow in their stores at one time, creating long lines to get in. So for many consumers, having prepped meals delivered to their door may just be the easier option.

It's one of the reasons I plan to watch the meal-kit delivery specialist's results closely when they're announced next week. 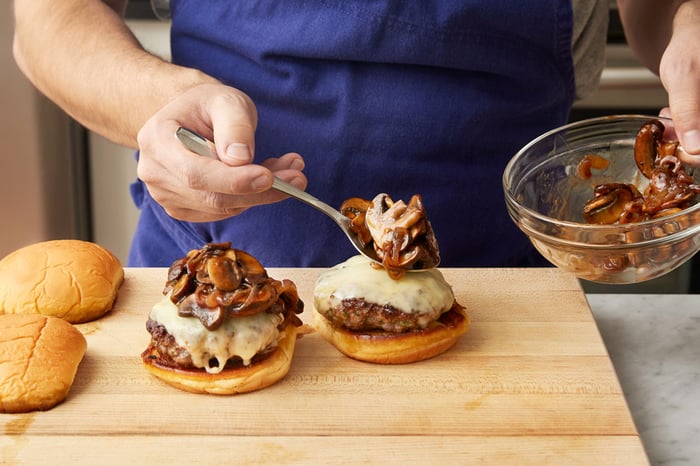 As coronavirus outbreaks turned into a full-blown global pandemic last month, Blue Apron announced it had seen a sharp increase in consumer demand, leading it to hire new temporary and permanent workers to fulfill the orders coming in.

That suggests it believes this could be a new normal for its business -- that having tried its service during a crisis, people will remain customers afterwards. That would be a mistake. Even Netflix understands that its subscriber spike will be a short-lived phenomenon, and it warned investors: "We expect viewing to decline and membership growth to decelerate as home confinement ends, which we hope is soon." Blue Apron doesn't seem to have similar self-awareness.

The meal-kit company's biggest problem has been customer churn. While it was able to attract large numbers of customers to try its service, they rarely stayed around, usually canceling after the trial period ended. Blue Apron would then have to go out and get more new customers.

Between March 2015 and March 2017, Blue Apron's customer rolls quadrupled in size, growing from 213,000 to over 1 million subscribers. But that came at a cost.

Even management realized that was unsustainable, and embarked on a campaign to grow smaller -- by spending less on customer acquisition -- and focus its attention on those customers who spent the most with it. The plan has worked to an extent, though that's not necessarily good.

Now Blue Apron is reportedly seeing a big tick higher in new customers, without having to spend a commensurate amount in new marketing dollars. That will certainly make its customer acquisition costs markedly lower, but there's no reason to believe customers will stay around after the pandemic subsides.

Meal-kit delivery is still an inefficient way to reach customers with food, particularly when supermarkets offer their own versions, often at lower cost. What investors need to watch for is whether management acknowledges this reality.

In either case, it won't bode well. Accepting that this is just a momentary growth spurt means business will crash again when the crisis passes. Ignoring the spike's fleeting nature means management is operating with blinders on.

What needs to be spelled out: how the dynamic will change, how Blue Apron will keep this influx of customers on the books, and how it will grow from here. Those are the things I'll be looking for next week.