Please ensure Javascript is enabled for purposes of website accessibility
Log In Help Join The Motley Fool
Free Article Join Over 1 Million Premium Members And Get More In-Depth Stock Guidance and Research
By Anders Bylund – Apr 27, 2020 at 10:30AM

The Cupertino tech titan's next-generation iPhones are wrestling with infrastructure slowdowns and a weak consumer market.

The COVID-19 crisis will hold up the next set of flagship models in the Apple (AAPL 0.01%) iPhone family, according to a report by The Wall Street Journal. The one-month delay will have ripple effects on Apple's component suppliers and retail distributors, and most of them are already wrestling with coronavirus fallout of their own.

WSJ's unnamed insider sources said that Apple has put together four new iPhone designs for the 2020 holiday season, but the coronavirus pandemic has slowed down the release in several ways. The virus disrupted Apple's supply chain and manufacturing operations, and consumer demand will probably come in below the company's original expectations due to economic damage from the virus containment efforts around the world. Tapping the brakes on the production schedule makes sense under these circumstances. 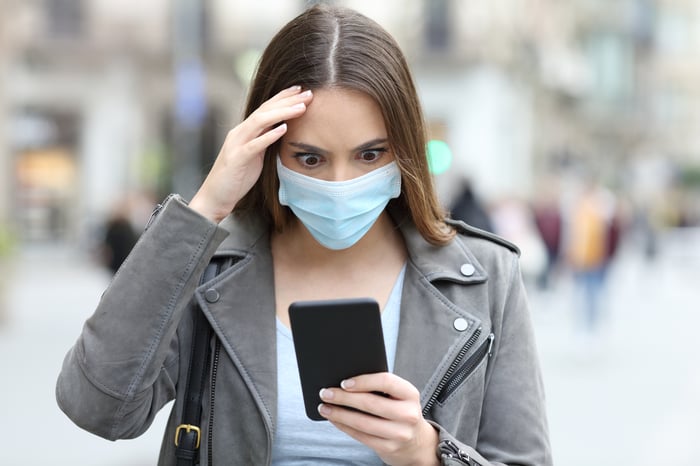 The sources also shared some details about Apple's upcoming iPhone lineup. Two of the new iPhones will ship with 5G connectivity features, while the other two won't, allowing buyers to jump aboard the 5G bandwagon as their personal budgets allow. The phones will also come with three different screen sizes -- 5.4, 6.1, and 6.7 inches -- all featuring organic light-emitting diode (OLED) screens.

These are premium-level flagships, not to be confused with the low-cost iPhone SE that just hit store shelves (and online retailer inventories). Originally slated for a September release, the next generation of flagship iPhones now looks more likely to be announced and released in October instead.

That delay still gives Apple plenty of time to ship iPhones in time for the holidays, but the new models will miss the back-to-school season. The report weighed gently on Apple's stock on Monday, with shares inching up 0.1% at the opening bell, while some promising coronavirus developments pushed the S&P 500 more than 1% higher.