Shares of Lexicon Pharmaceuticals (LXRX) have soared today, closing out the session with gains of 12%, after the company reported first-quarter earnings results. The biotech beat expectations for both the top and bottom lines.

Revenue in the first quarter declined 13% to $8 million, which was slightly ahead of the consensus estimate of $7.8 million. That translated into a net loss of $66.6 million, or $0.63 per share. Analysts were modeling for $0.69 per share in red ink. The biotech company's Xermelo, which treats carcinoid syndrome diarrhea, is seeing growth and represents the vast majority of revenue. 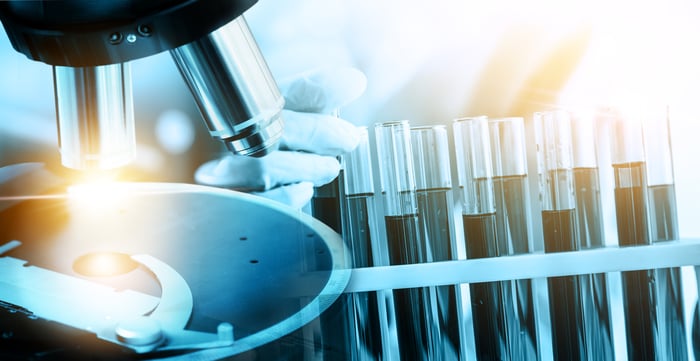 "We achieved 17% growth in XERMELO net sales for the first quarter of 2020 compared to the prior-year period, and we see favorable growth dynamics going forward," CEO Lonnel Coats said in a statement. "We have made good progress on our pipeline, having fully enrolled the first efficacy cohort of 20 patients in the Phase 2 telotristat ethyl study in biliary tract cancer from which we expect top-line data later this year."

Lexicon laid out several milestones on the horizon, including the initiation of a phase 2 study for LX9211 in diabetic peripheral neuropathic pain that is expected in mid-2020. The company is expected to get data on the aforementioned phase 2 study of telotristat ethyl in biliary tract cancer in the fourth quarter.

Lexicon also adjusted certain parts of its 2020 guidance. On the conference call with analysts, CFO Jeffrey Wade said the company was lowering its operating expense outlook for the year to a range of $235 million to $255 million, down from the prior forecast of $245 million to $275 million. Research and development expenses are also expected to be lower at $180 million to $190 million, compared to earlier guidance of $190 million to $210 million.