Please ensure Javascript is enabled for purposes of website accessibility
Log In Help Join The Motley Fool
Free Article Join Over 1 Million Premium Members And Get More In-Depth Stock Guidance and Research
By John Rosevear – Apr 28, 2020 at 11:02AM

The company plans to ramp up gradually over the next few months.

Ford Motor Company (F -2.08%) announced Tuesday that it will begin reopening its European plants on May 4, after implementing new protections for workers.

Ford plans to restart its European factories in phases, with gradual ramp-ups to full production over the next few months. The company will initially focus on filling so-called "sold orders," meaning vehicles ordered by dealers for customers who have already committed to buying. Ford's production will increase as suppliers, local authorities, and dealers gradually get back to normal.

Ford shut down its European factories and most of its offices on the continent on March 19, as the coronavirus outbreak spread through Europe.

Ford executives have been emphasizing the extensive safety measures that the company is putting in place in its factories, in an effort to reassure nervous workers that it is safe to return. 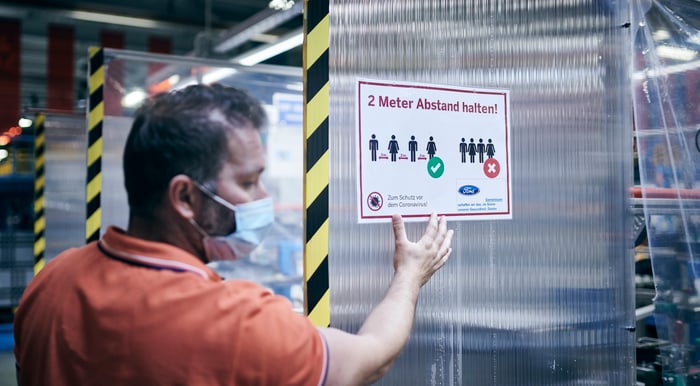 Ford has implemented new safety measures at its European factories, including mandatory masks and new dividers to protect workers. Similar measures will be put in place at other Ford plants around the world as they reopen, Ford said. Image source: Ford Motor Company.

"Our employees need to know that we are taking the appropriate steps to safeguard their well-being at work," said Ford Europe chief Stuart Rowley.

Those measures include mandatory masks (made by Ford in the U.S.) and temperature checks for anyone entering a Ford facility, as well as revamped work layouts to ensure that employees can maintain appropriate social distancing.

Martin Hennig, the labor leader who chairs Ford's European Works Council, indicated that he and other labor leaders are satisfied with Ford's worker-safety plans. "Our union leaders across Europe have agreed on far-reaching measures for the best possible protection for our employees, which go beyond the nationally prescribed measures and apply to all our plants in Europe," he said.

Most of Ford's European factories will resume some level of production next week. The exceptions? Three engine factories in Spain and the U.K. will wait to reopen later in the month, Ford said.