Positive results out of D.R. Horton lifted all its fellow homebuilders.

Shares of D.R. Horton (DHI -0.27%), "America's largest homebuilder," surged in Tuesday trading -- and sparked a rally among, well, pretty much any other homebuilding stocks you could name. By the time trading closed for the day:

And that's the bad news. The good news is that LGI and Pulte topped 10% gains earlier in the day, while Lennar got close -- delivering even fatter profits to investors who cashed in earlier. 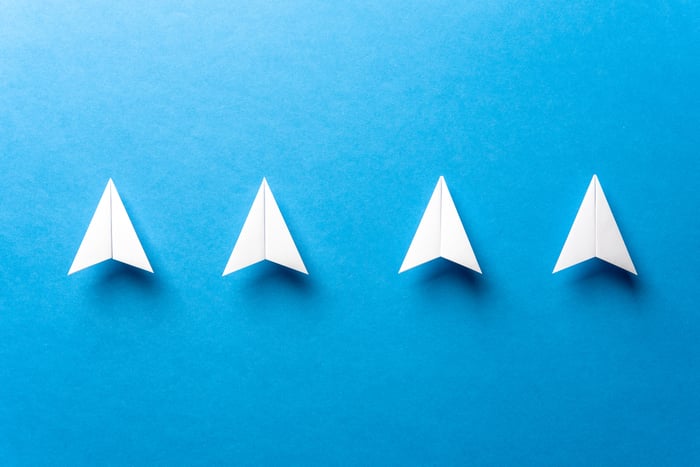 So what was it that D.R. Horton had to say, specifically, that got investors so enthusiastic about homebuilding stocks in general?

Basically, this is a story of one strong earnings report sparking hopes that other, similar companies will "beat" on earnings as well. This morning, D.R. Horton surprised Wall Street analysts with a report of $4.5 billion in fiscal second-quarter sales (9% better than last year, and 2% better than expected), and $1.30 per share in Q2 profits (up 40% year over year, and 16% ahead of expectations).

That's great news for D.R. Horton, and that stock was amply rewarded for its success, closing up 11.5% today. But investors are extrapolating D.R. Horton's good fortune to similarly bullish prospects for other homebuilding stocks. Does that make sense?

Perhaps, yes. After all, in addition to selling so much, and earning so much, D.R. Horton had optimistic things to say about the future. Despite a slowdown in sales, attributable to homebuyers staying home during the COVID-19 pandemic, and some uptick in cancellations of contracted sales toward the end of the quarter, D.R. Horton noted that home orders still grew strongly -- up 20% in terms of units contracted to be built, and up 22% in terms of the dollar value of those contracted homes.

Granted, D.R. Horton management wasn't sufficiently confident in what comes next to give firm guidance for the rest of this year's sales or earnings. But management did say that it thought its balance sheet was strong enough to keep it going through the worst this recession can throw at it.

So what does that imply for Pulte, Lennar, and all the rest?

Well, consider: D.R. Horton -- an $18 billion-per-year business -- is carrying $2.3 billion in net debt on its books. Relative to those numbers, PulteGroup is a smaller operation (annual sales: $10.5 billion), but carries nearly as much net debt ($2 billion).

Lennar is a bigger operation than D.R. Horton (sales: $22.9 billion), but also much more heavily indebted ($8.3 billion in net debt, according to data from S&P Global Market Intelligence).

LGI and Meritage, meanwhile, are much smaller operations ($1.8 billion and $3.7 billion in annual sales, respectively), with much smaller debt loads -- $658 million net of cash on hand for LGI, and $730 million for Meritage. (Meritage also reported earnings of its own -- but only after close of trading today. Like D.R. Horton, it beat estimates handily.)

So what should investors take away from all of this? With the exception of Lennar, debt levels look reasonable across this group -- even heading into a recession, when I'd prefer to see less debt in general. And when you take D.R. Horton's earnings beat in the morning, and add to it Meritage's beat in the afternoon, prospects look generally good across the homebuilding industry right now -- coronavirus or no.