Please ensure Javascript is enabled for purposes of website accessibility
Log In Help Join The Motley Fool
Free Article Join Over 1 Million Premium Members And Get More In-Depth Stock Guidance and Research
By Jeremy Bowman - Apr 28, 2020 at 11:35AM

Retailers were gaining on signs across the country that the economy is beginning to reopen.

Shares of Nordstrom (JWN 2.32%), Dollar Tree (DLTR -0.50%), and Foot Locker (FL -0.33%) were among a number of retail names making big gains on Monday as the sector got a boost from several states beginning to reopen their economies or announcing plans to do so.

Last Friday, Georgia allowed nonessential retail stores and businesses including gyms and barbershops to open, and on Monday restaurants and movie theaters were given the green light to open their doors. Among other states making similar moves were South Carolina, Tennessee, Alaska, Oklahoma, and Minnesota. Texas is planning to begin reopening its economy on May 1, and even California reopened some of its beaches over the weekend.

Investors not surprisingly viewed these moves as positive steps, and a sign that the worst of the crisis is behind the retail industry. As a result, sector stocks gained broadly, with the S&P SPDR Retail ETF (NYSEMKT: XRT) finishing Monday up 5.3%, while the S&P 500 tacked on 1.5%.

Nordstrom jumped 13.6% on the day, while Dollar General gained 7.7%, and Foot Locker finished the session 7.5% higher. 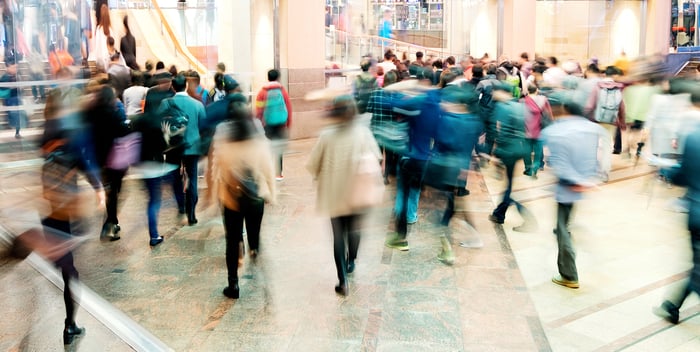 Businesses are beginning to reopen and may look like this again someday. Image source: Getty Images.

While Nordstrom and Foot Locker both represent the apparel sector, Dollar Tree, which also owns Family Dollar, is a discount retailer, and the range among the three stocks shows that Monday's gains were shared broadly in the sector.

The apparel sector has been one of the hardest-hit by the pandemic. Not only have outfitters like Nordstrom and Foot Locker had to close their stores, but apparel retailers are in the unfortunate position of being stuck with seasonal inventory they can no longer sell. Additionally, many of the occasions that drive Americans to buy new clothes, like work, dating, and parties, have essentially been eliminated by the stay-at-home orders. Since it sells athletic apparel, Foot Locker may be less affected here than Nordstrom, as Americans are still exercising.

Nonetheless, Foot Locker said last week that it would furlough the majority of its employees starting April 26 after having closed its stores in March, so it's unclear when the company plans to reopen.

Nordstrom, meanwhile, has taken a number of steps to shore up its liquidity in recent weeks, including drawing down its $800 million line of credit and taking on $600 million in debt at an 8.75% interest rate, showing that lenders view the department store operator as risky and that the company may be quickly burning cash with its stores shuttered.

As an essential retailer, Dollar Tree has kept its stores open during the crisis, and it reported a surge in traffic in March as Americans stocked up on goods like cleaning products. It even said it would hire 25,000 additional employees because of increased demand. However, the company also warned that profit margins would take a hit due to its sales mix shifting to lower-margin products, higher wages and bonuses, and higher supply chain expenses. Therefore it pulled its guidance for the first quarter and the fiscal year, indicating uncertainty ahead.

As of Tuesday morning, these stocks were trading near flat, indicating that the tailwind from reopening may just be a one-day bump for now.

While it's easy to see why investors are encouraged by the reopenings in a number of states, investors should be aware that these chains still face an uphill battle, as opening stores back up is only the first step on a long road to full health for both the U.S. economy and the retail sector. Even when stores are back open, social distancing policies will likely mean that sales will be down, and some consumers may still be reluctant to visit them out of fear of contracting the virus. A second wave of infections could also force stores to close once again.

Finally, more than 26 million Americans have filed for unemployment since the crisis began, meaning consumer discretionary spending will likely be down for the foreseeable future. While these stocks could continue to recover on signs of the economy returning to normal, they still face significant challenges.