“A crisis unprecedented in our history,” said CEO Gary Kelly, discussing how the airline is dealing with the COVID-19 pandemic.

Southwest Airlines (LUV -2.44%) wasn't exactly pleased to report its first quarterly loss in nearly a decade on Tuesday, especially considering that it expects the second quarter to be worse than the first. However, the company did note some short-term positives, as well as some reasons to be optimistic over the long term.

Here are the three main takeaways from one of Southwest's most impactful quarters (and forecasts) in the company's history. 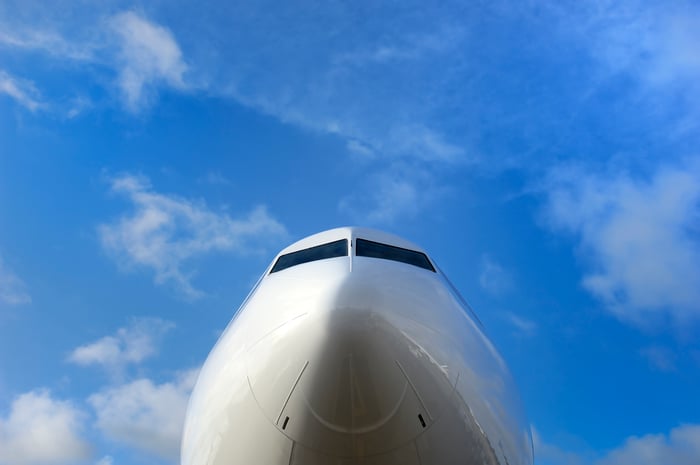 Everyone on Wall Street and Main Street knows that airlines are hurting right now. Shelter-in-place mandates and social distancing related to the coronavirus pandemic impede airlines from functioning normally, especially since most had been increasing capacity and buying back shares going into the crisis.

The main objective for the major U.S. airlines, Southwest included, is to make what few flights they are scheduling as profitable as possible, while simultaneously raising enough cash to weather the storm. Southwest is doing what it can to minimize its cash burn by parking and storing planes, and running a cost-effective operation that consists of a lean flight schedule focused on saving fuel, engine wear, and fees associated with takeoff and landing at airport terminals.

A revenue drop of that magnitude means that Southwest's business is essentially compromised for the foreseeable future. The main reason Southwest's stock actually gained on the day it released its report, despite its terrible earnings and outlook, is due in part to the company's opinion that it has positioned itself favorably to survive and rebound -- assuming things begin turning around in the third and fourth quarters.

Even so, Southwest has been pragmatic in its need to raise extra cash. According to Southwest management, it entered "this year with significant financial strength and a fortress balance sheet," and has since raised $5.2 billion in debt financing. Management also noted that it is "the only U.S. airline with an investment-grade rating by all three rating agencies," giving the company favorable rates and terms when it comes to debt financing.

Chairman and CEO Gary C. Kelly noted on the conference call that Southwest "began this year with the smallest amount of debt to total capital in our history," positioning the company favorably to raise debt without becoming overly leveraged. Leverage is a big concern for the entire airline industry because many airlines are increasing their debt-to-capital ratios from levels that were already concerning before the onset of the COVID-19 pandemic.

Southwest is also a beneficiary of the federal Payroll Support Program (PSP), a direct means to protect the jobs of 60,000 Southwest employees. It comes in the form of disbursements of more than $3.2 billion -- $2.3 billion in grants to support payroll, and $1 billion in unsecured low-interest-rate loans, along with warrants that allow the U.S. Treasury to purchase up to 2.6 million shares of Southwest stock. The PSP program has already given Southwest $1.6 billion and will give it another $1.6 billion over the next three months.

In addition to the PSP program, Southwest noted that its employees are participating in temporary-leave programs that saved the company $15 million in March alone.

The combination of debt financing, government relief, and cost-cutting positions Southwest to be OK through the third quarter of 2020. After that, it's too hard to predict what state the economy will be in, how that will affect airlines, and what government relief, if any, will be available.

Compared to other airlines, Southwest appears to be the best-positioned, from a balance-sheet perspective, to get through the current crisis. Over the long term, the company is confident that the "demand for air travel will rebound." But the short-term severity of Southwest's cash burn, and the likelihood that air travel volume will remain well below 2019 levels for years to come, are serious causes for concern.

At these levels, Southwest's stock does have some appealing value, but it's an investment that could require a lot of patience before it pays off.