Please ensure Javascript is enabled for purposes of website accessibility
Log In Help Join The Motley Fool
Free Article Join Over 1 Million Premium Members And Get More In-Depth Stock Guidance and Research
By David Haen - Apr 29, 2020 at 7:47AM

Large and small drug developers and academic researchers are furiously testing and hoping to find one or more treatments for COVID-19. While novel drugs aimed specifically at the coronavirus could potentially yield the greatest effects, the quickest route to a treatment might lie in repurposing existing drugs.

Last week, Karyopharm Therapeutics (KPTI -0.55%) entered the fray of drug developers seeking to find solutions for those suffering from COVID-19. It kicked off a clinical trial with Xpovio, its oral drug approved last July by the Food and Drug Administration (FDA) as a treatment for patients with relapsed or refractory multiple myeloma (a form of blood cancer). 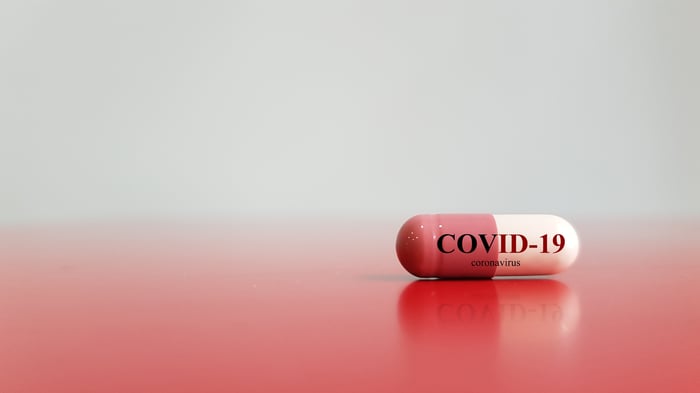 The FDA granted accelerated approval to Karyopharm's Xpovio in July 2019 as a treatment for multiple myeloma patients who had received at least four prior treatments. When receiving it in combination with the corticosteroid dexamethasone, 25.3% of patients taking Xpovio achieved a complete response (meaning an absence of detectable cancer), and the median duration of response was 3.8 months. While that might not sound great, keep in mind that these patients have advanced-stage cancer and have already taken at least four prior therapies.

On April 7, Karyopharm highlighted that Xpovio disrupted the replication of many respiratory viruses, including coronavirus, in preclinical testing. Peeling the onion back one more layer, Xpovio inhibits the cellular protein XPO1. XPO1 helps transport viral proteins and amplifies signals for inflammation. Therefore, inhibiting the protein could potentially stop the virus from replicating and turn off pro-inflammatory signals triggered by the virus. Xpovio holds the distinction of being the only FDA-approved inhibitor of XPO1.

Karyopharm announced on April 20 that the first COVID-19 patient in a global multi-center, placebo-controlled clinical trial had been dosed. We'll dig into the trial design, but I wanted to highlight the speed at which this transpired. Less than two weeks after announcing the preclinical data, Karyopharm dosed the first patient in the trial.

The phase 2 clinical trial expects to enroll 230 hospitalized patients with severe COVID-19 in the U.S., Europe, and Israel. It also has a placebo control arm. The size of the study, multiple sites, and a control arm will produce more robust results than exploratory trials in one location with few patients and no control arm.

Xpovio will be given orally three times a week for two weeks. Physicians can elect to extend treatment by two additional weeks for patients experiencing clinical benefit. The COVID-19 patients will receive a 20-mg dose, compared with Xpovio's current approved dose of 80 mg in multiple myeloma.

Following World Health Organization (WHO) recommendations, the primary endpoint is time to clinical improvement using the ordinal scale. This scale is part of the WHO's R&D Blueprint for COVID-19 clinical trials. Secondary endpoints include the overall death rate at day 28 and the rate of and time to mechanical ventilation.

Since the trial's initial treatment period is only two weeks long, results could be available this summer. It will depend on how quickly patients enroll in the study. Due to the short treatment period, we might expect few dropouts unless some unexpected side effects emerge.

Thrombocytopenia, a condition marked by abnormally low platelets in the blood, is a primary side effect of Xpovio. However, there are reports, including an April 15 article in the Annals of Hematology, that suggest COVID-19 can also cause thrombocytopenia. It will be important to understand whether Xpovio exacerbates thrombocytopenia in these severely ill patients, since that could impact the number and types of patients who could ultimately receive the drug.

The field of biotechs taking a stab at fighting COVID-19 seems to be growing constantly. The stakes could be huge for any company that successfully develops a treatment, even if it's only for patients with certain characteristics. Karyopharm's odds are just as good as anyone's right now. The rigor of its newly launched trial is a positive.

Biotech investors can take comfort that Karyopharm has an approved drug for late-stage multiple myeloma. At the start of March, it announced results from a key phase 3 trial showing that Xpovio also works in multiple myeloma patients who had one to three prior treatments, meaning patients in earlier stages of the disease could receive Xpovio. Investors were happy, ponying up $172.5 million in a fresh capital infusion for the company three days later.

Flush with cash and an active cancer drug, any success against COVID-19 is a further upside for Karyopharm. Let's keep our fingers crossed that Xpovio performs in humans as it did in the lab.